Revenues increased 151% yoy thanks to rising interest rates and other income, cost fell 4.85%

Cost of risk amounted to only 0.091% amid limited asset quality concerns 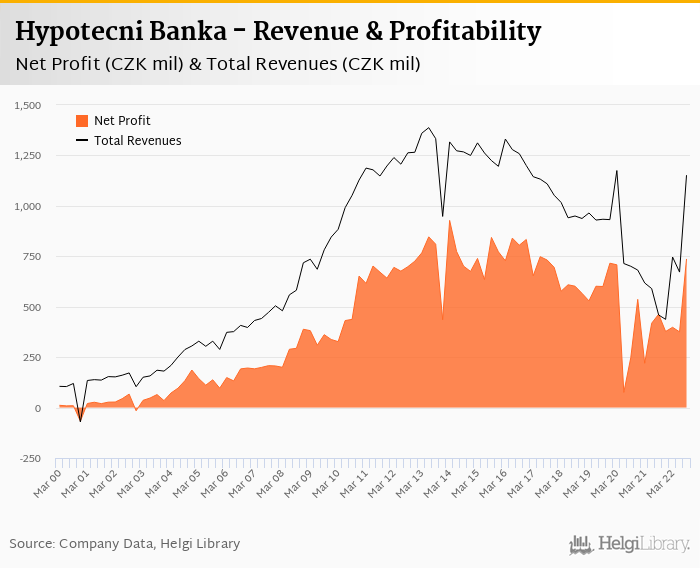 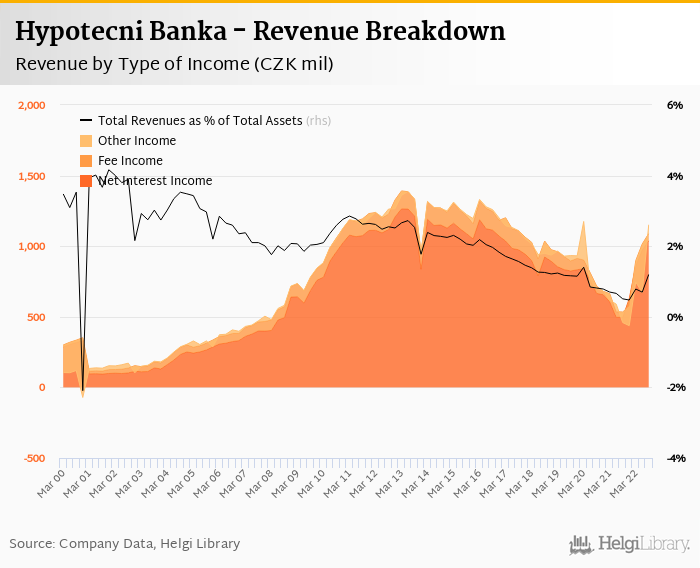 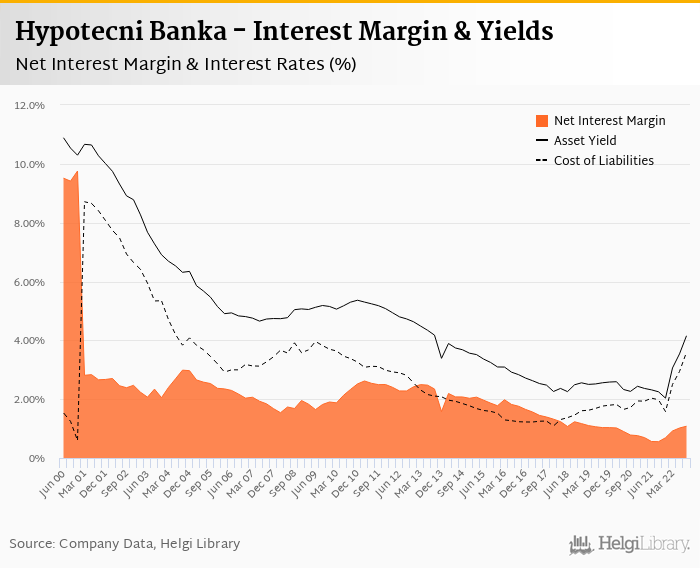 Costs decreased further 4.85% yoy and the bank operated with hard-to-believe cost to income ratio of 13.6% in the last quarter. When last four quarters are taken into account, the cost to income ratio would still account for impressive 32% setting a tough benchmark for mortgage lending business.

Staff cost rose 11.5% as the bank employed 71 persons. Due partly to a specific nature of the bank's business and limited size of the Bank, Hypotecni Banka pays one of the best salaries in the sector with average cost accounting for CZK 147,269 per person per month when social and health care insurance cost is included: 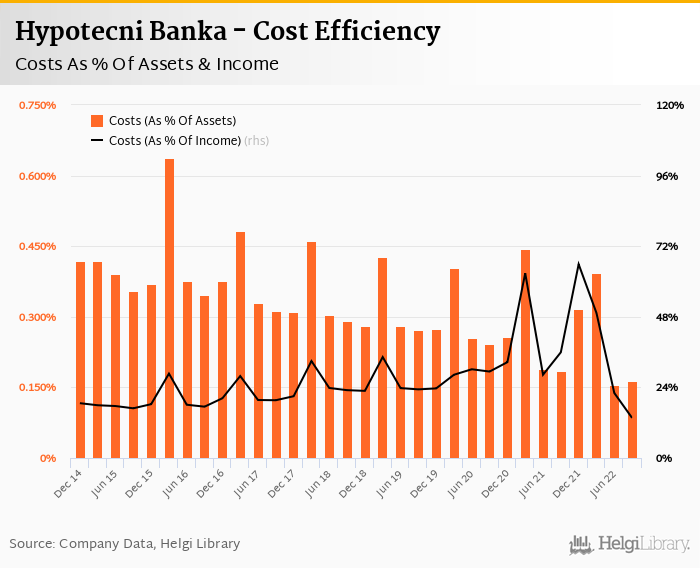 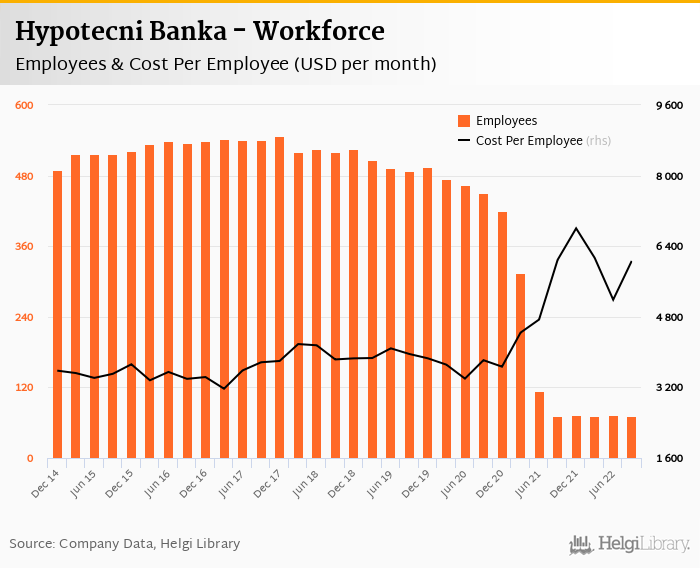 With the absence of customer deposit collection, the Bank has been funding most of its loan portfolio with issuance of mortgage-backed bonds (85-87% of loans) with the remaining part being covered by bank's equity. 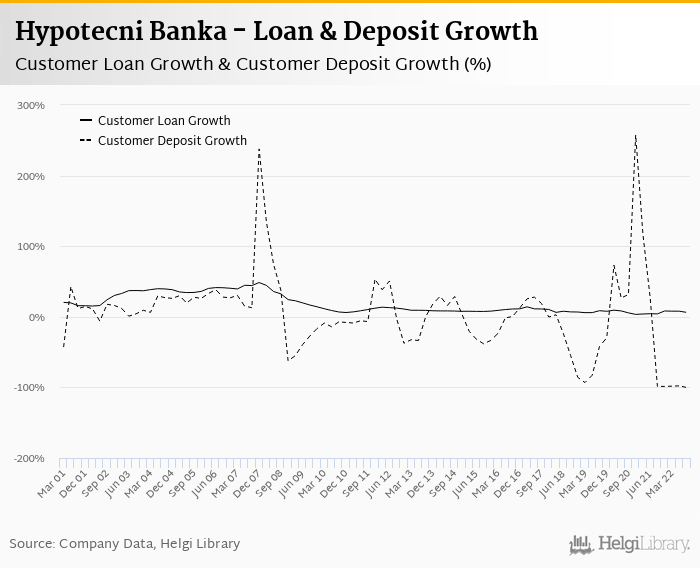 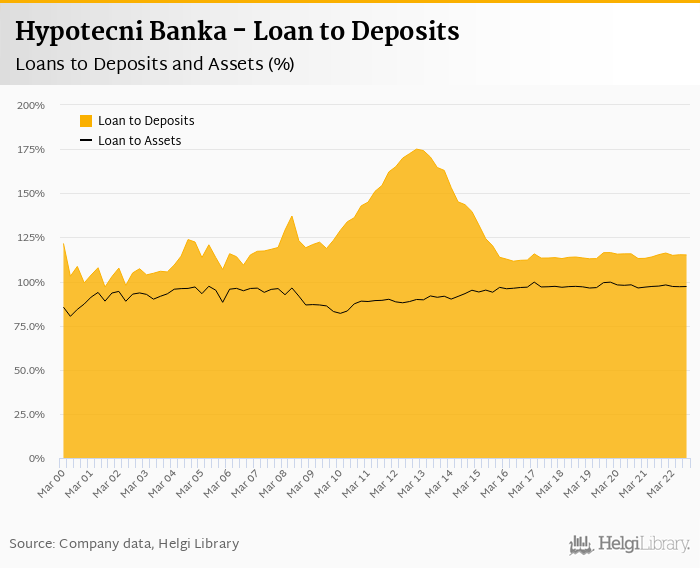 With no details reported in 3Q2022, we assume the Bank grew its mortgage loans in line with the market (i.e. close to zero when compared to previous quarter), so the annual growth could have reached 6.3-6.5% yoy: 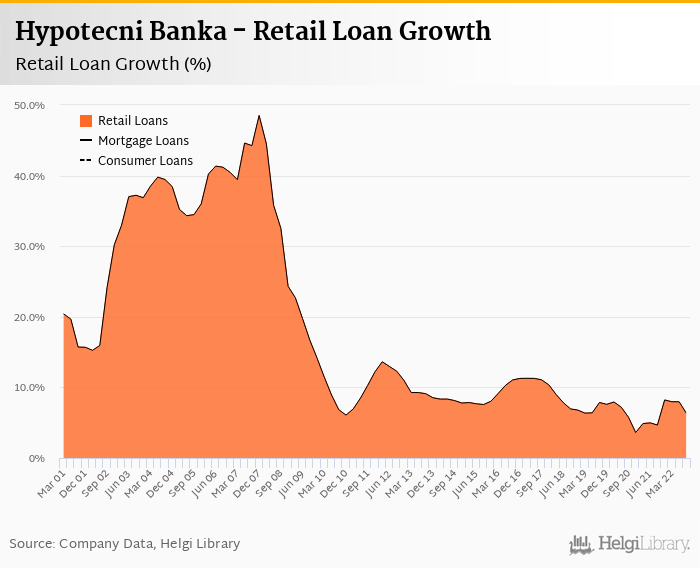 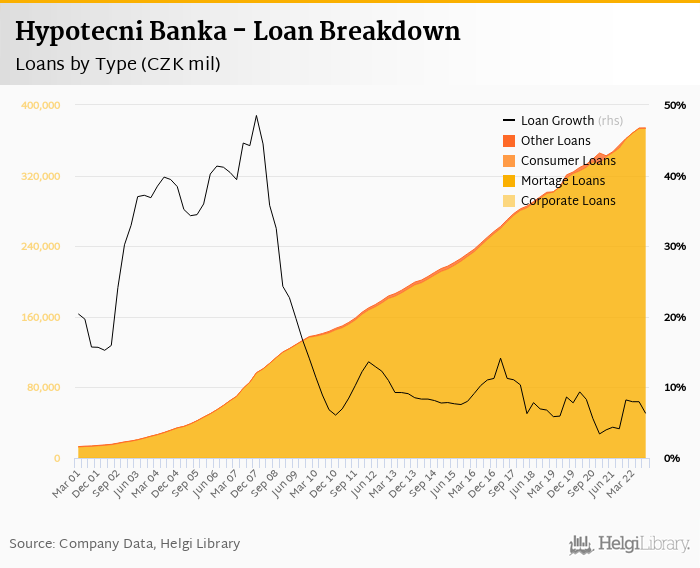 We estimate that Hypotecni Banka has lost 0.10 pp market share in the last twelve months in terms of mortgage loans (holding 22.5% of the market at the end of 3Q2022). In terms of retail and total loans, we think it held 17.6% and 9.2%, respectively at the end of September: 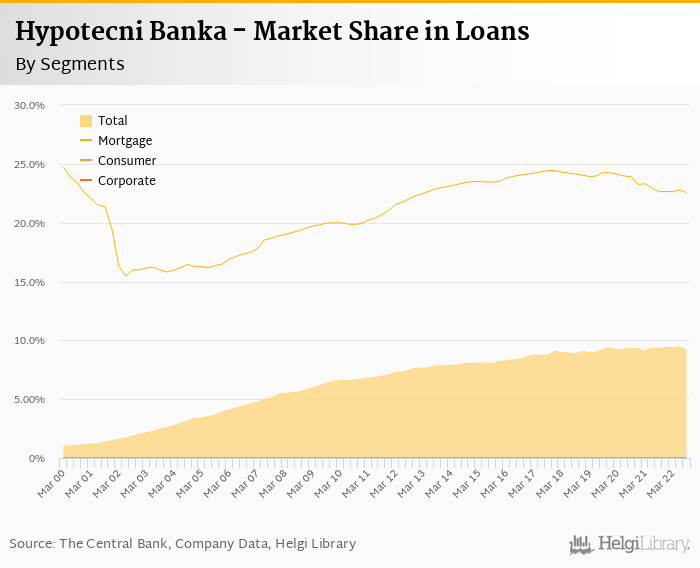 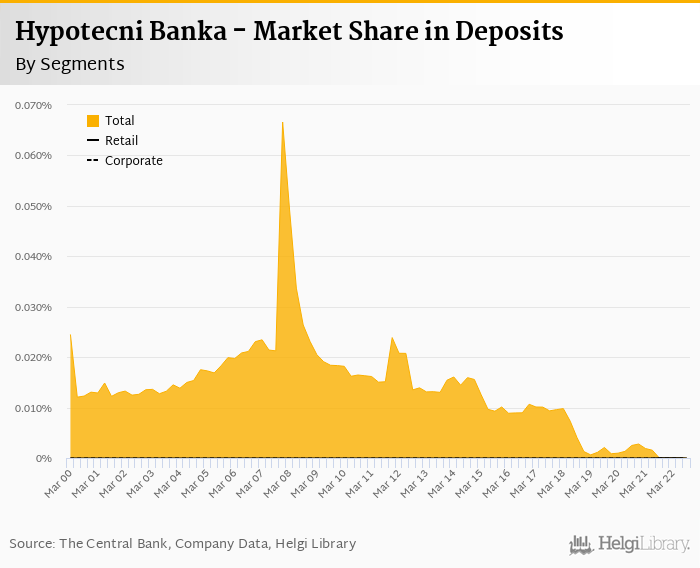 Cost of risk reached only 0.091% of average loans in the third quarter and provisions have "eaten" only 8.6% of operating profit, so the Bank does not seem to face any significant pressure from asset quality deterioration yet.

Without further details, we therefore expect Hypotecni Banka's non-performing loans reached 0.67-0.68% of total loans, down from 0.775% when compared to the previous year. Thanks to strong real estate collateral, provision coverage will likely remain relatively low at some 27-30% of NPLs, down from 37.1% for the previous year: 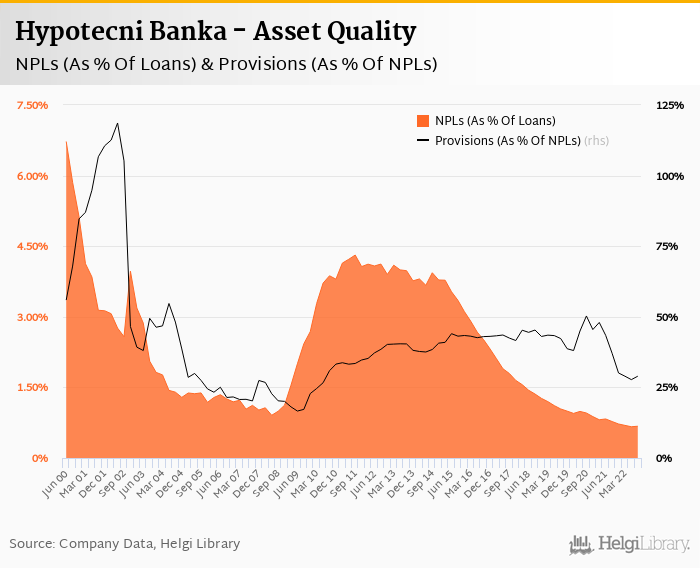 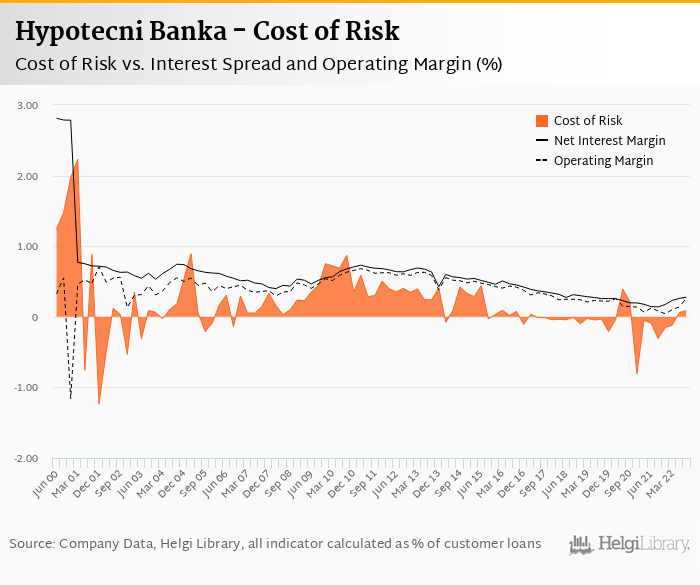 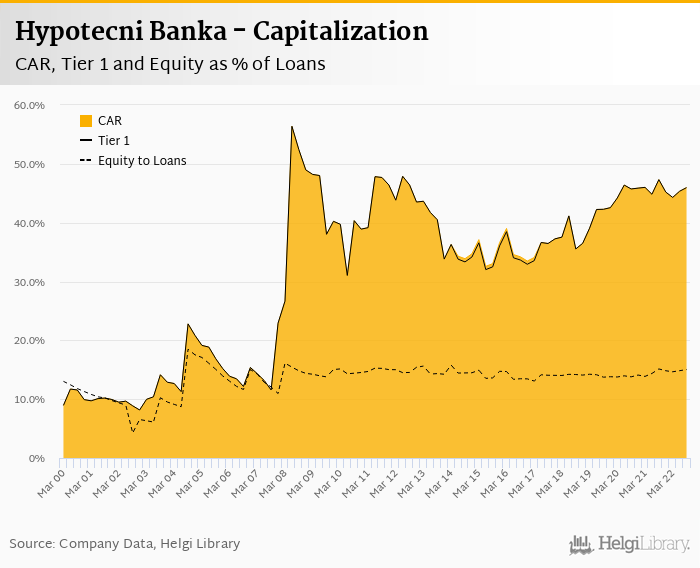 Overall, Hypotecni Banka made a net profit of CZK 737 mil in the third quarter of 2022, up 59.2% yoy. This is the highest quarterly profit seen since the middle of 2017. On the operating profit level, the Bank increased its profit three-fold to CZK 995 mil, which is the highest figure since September 2016.

Thanks to the heavy overcapitalization, the annualized return on equity reached only 5.29%. When equity hypothetically adjusted to 15% of risk-weighted assets, Hypotecni Banka would generate return on equity of 10.8%: 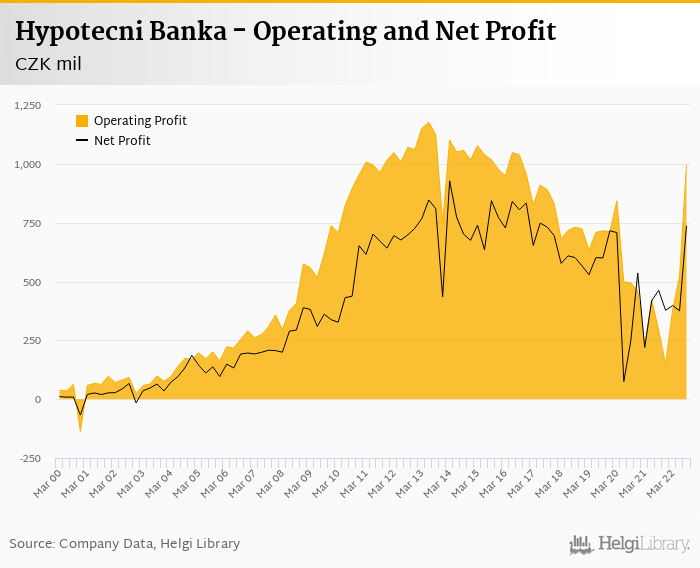 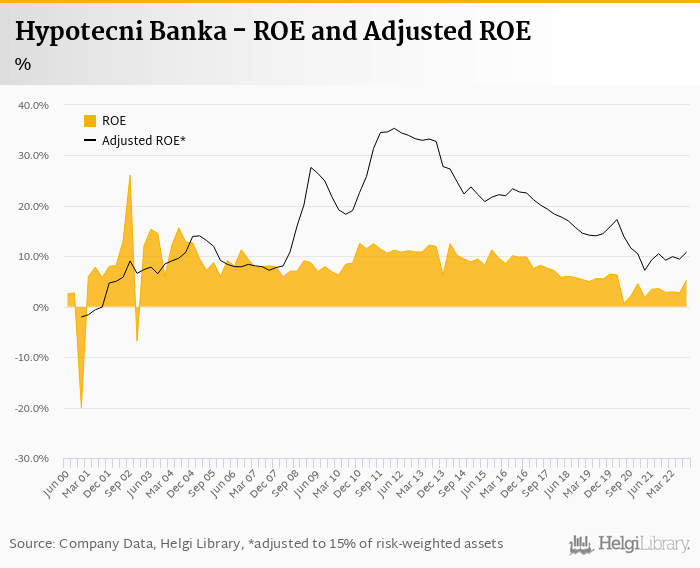 Impressive set of results driven by strong revenue growth, both interest as well as non-interest related, good cost control and limited pressure from asset quality deterioration. As far as the near future is concerned, we will be closely watching effects of potential price fall in real estate prices on the asset quality of the Bank's portfolio and overall volume growth on the market.