Cost to income decreased to 48.1%and underlying ROE would have reached of 13.6%

Revenues increased 144% yoy to CZK 489 mil in the third quarter of 2022. This is an all-time high of the bank thanks mainly to higher interest rates and aggressive volume growth seen in the last year or so. Net interest income rose 73.6% yoy and formed 86.3% of total with net interest margin increasing 0.560 pp to 2.06% of total assets. Fee income grew 145% yoy and other non-interest income contributed further CZK 60 mil to the top line. When compared to three years ago, revenues were up 78.8%: 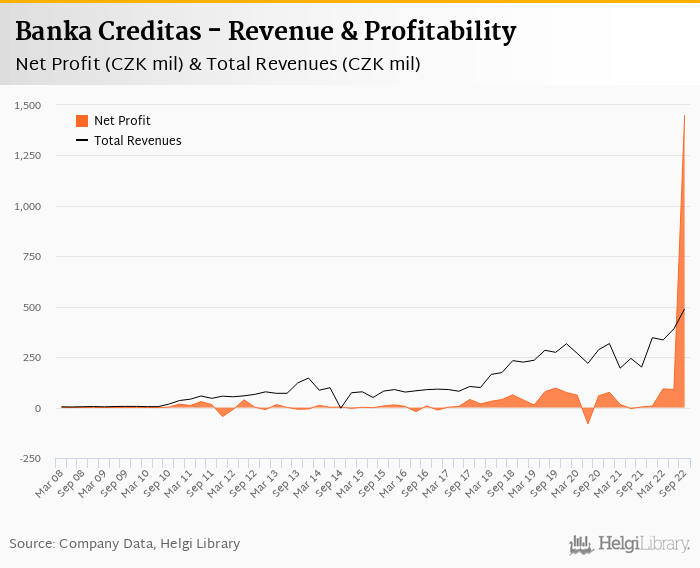 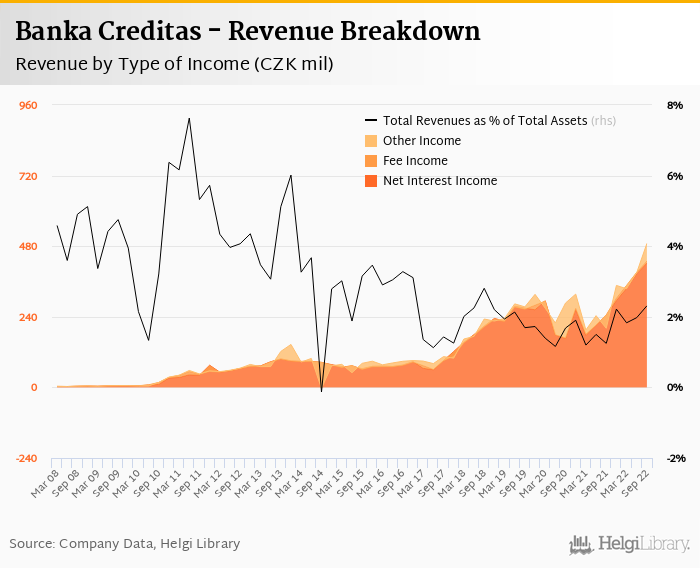 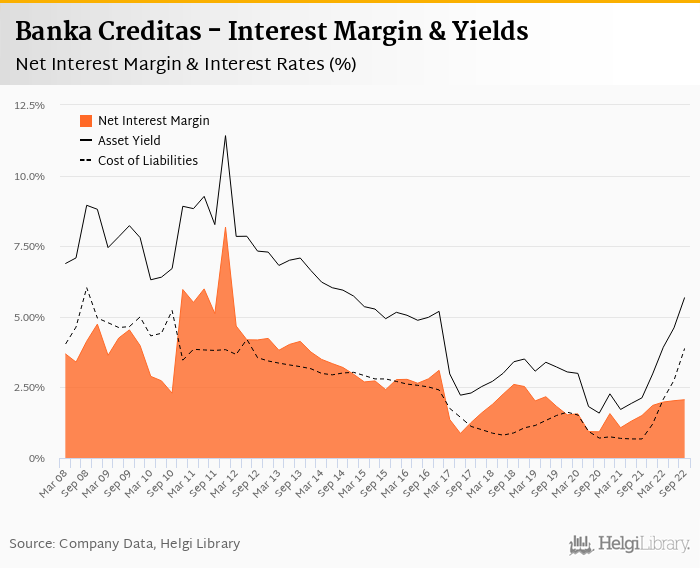 Costs increased by 7.38% yoy and the bank operated with average cost to income of 48.1% in the last quarter. Staff cost rose 25.8% as the bank employed 433 persons (up 6.65% yoy) and paid CZK 86,065 per person per month including social and health care insurance cost: 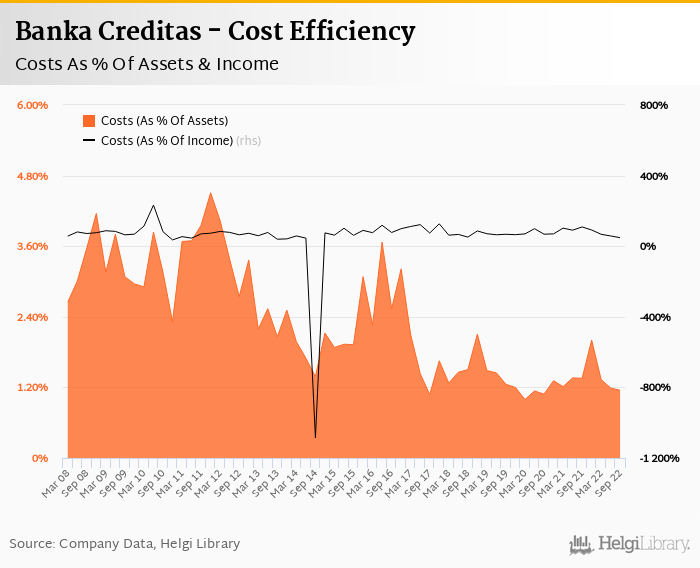 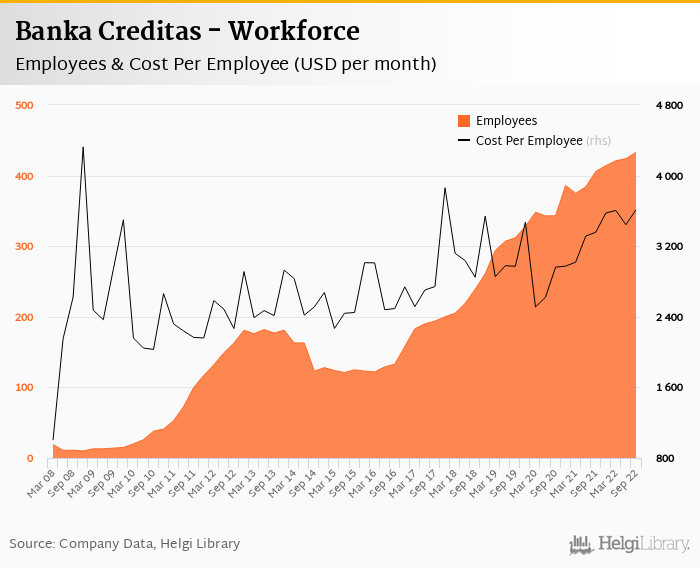 Without providing any details, we estimate that Banka Creditas's customer loans and deposits grew by a third in the last twelve months. That’s compared to average of 27.8% and 17.6% average annual growth seen in the last three years.

In spite of the well above-average growth, Banka Creditas's loans accounted for around 36.0% of total deposits and 33.1% of total assets at the end of September 2022, on our estimates. 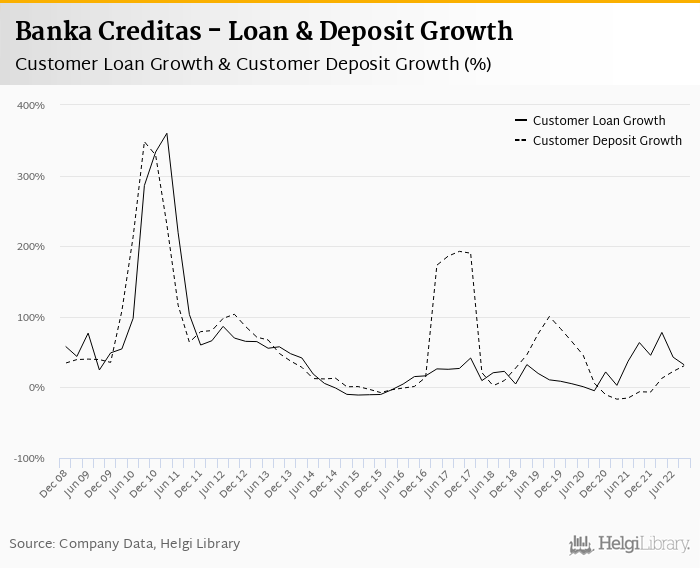 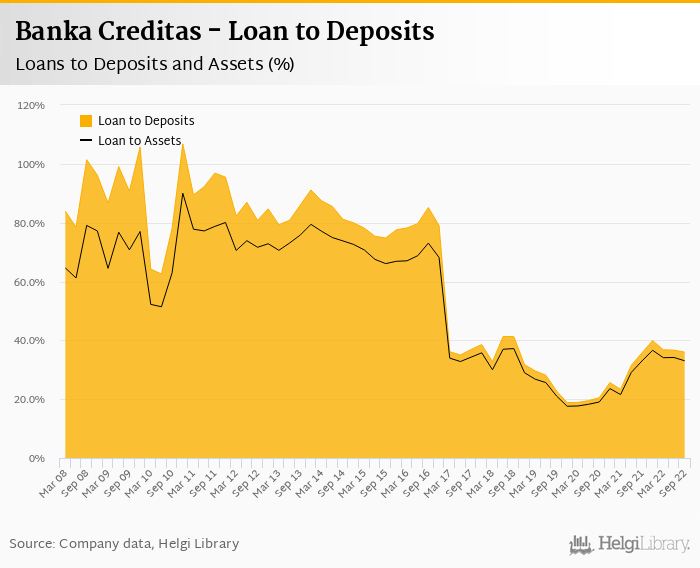 We assume retail loans have more than doubled in the last twelve months and account now for a quarter of the loan book. Corporate loans might have increased by a fifth and we expect they formed almost 80% of bank's total loans at the end of September 2022: 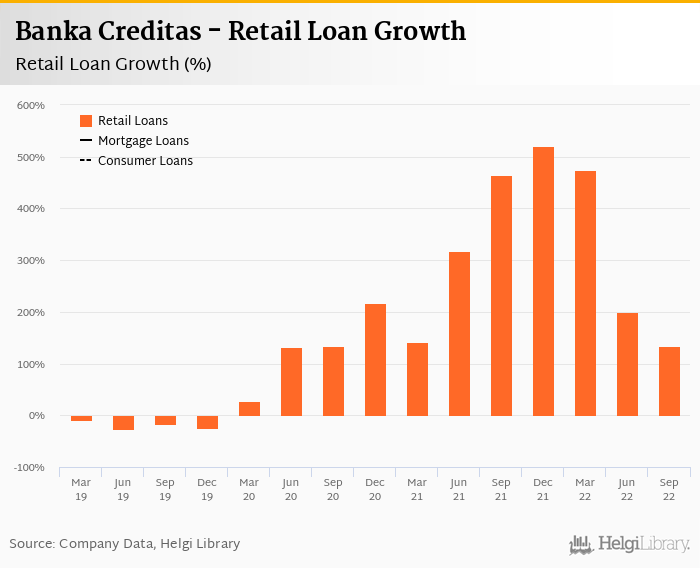 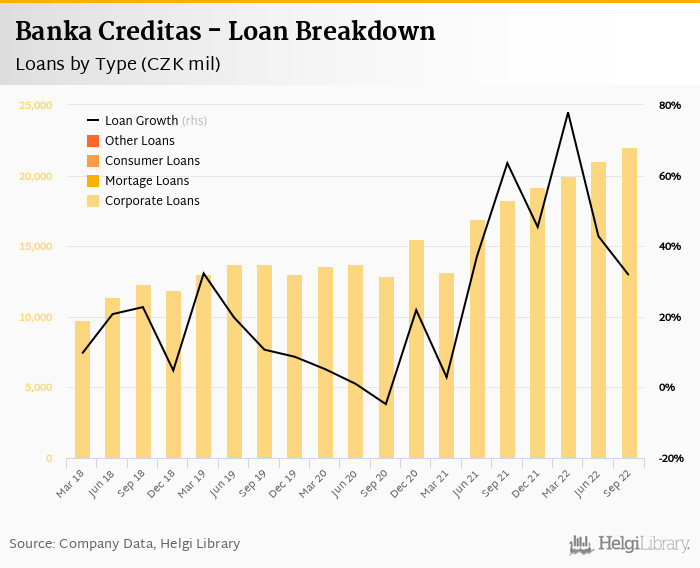 We therefore estimate that Banka Creditas has gained 0.126 pp market share in the last twelve months in terms of loans (holding 0.689% of the market at the end of 3Q2022). On the funding side, the bank seems to have gained 0.213 pp and held 1.21% of the deposit market: 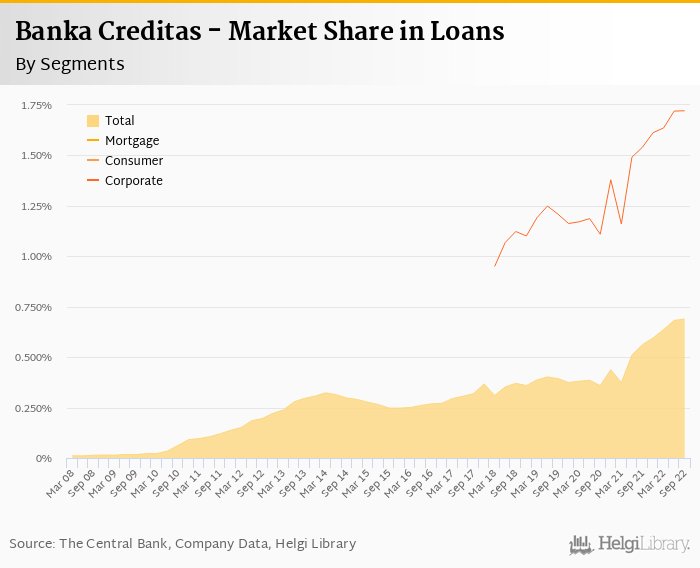 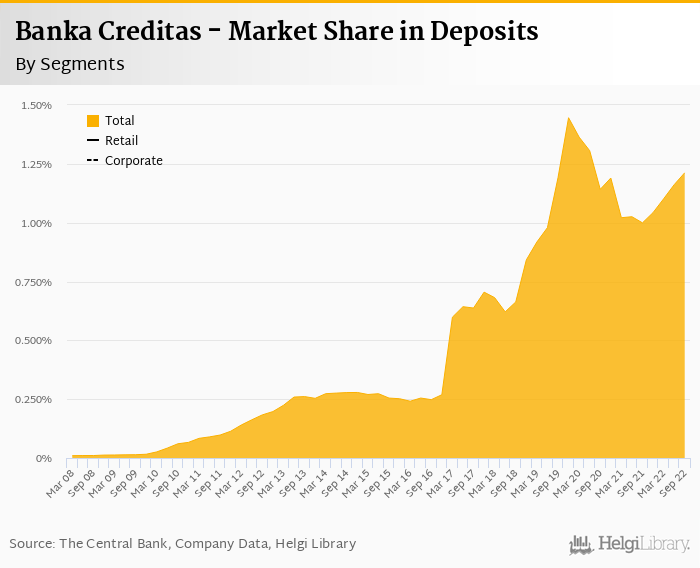 Without having any detailed numbers, we guesstimate that Banka Creditas's non-performing loans reached 7.0-8.0% of total loans at the end of September,  down from 10.6% when compared to the previous year. Similar to Trinity Bank, we believe provision coverage remains relatively low at around a fifth of non-performing loans as large part of corporate loans is covered by real-estate collateral. 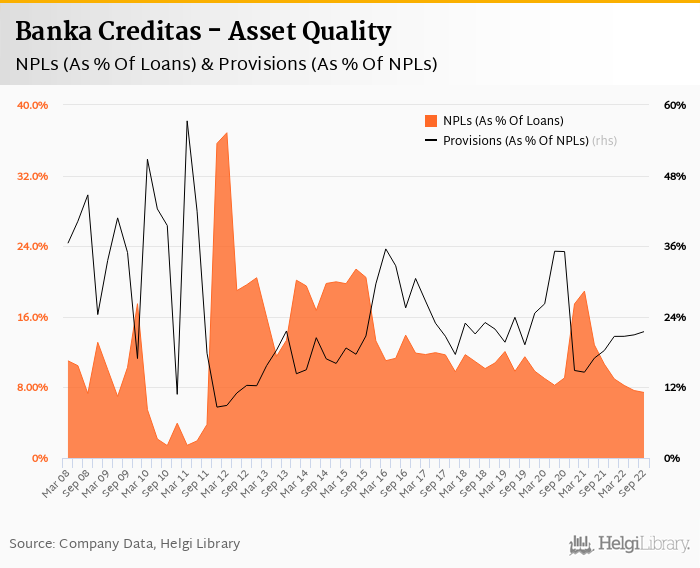 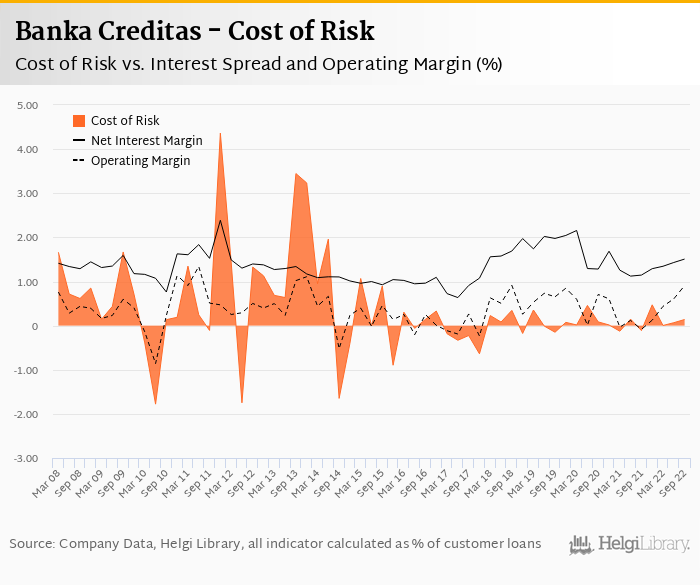 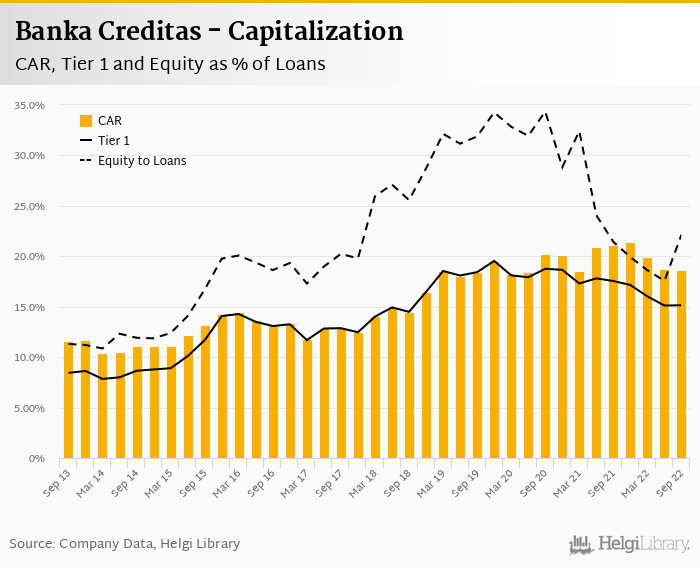 Overall, Banka Creditas made a net profit of CZK 1,450 mil in the third quarter of 2022. Although revenues and operating profitability were at all-time high, the main part of the profit came from CZK 1,272 mil extraordinary income booked on a profit share from bank's subsidiary. We assume this is a result of an accounting operation from an acquisition of Expobank (now renamed to Max banka), which was completed in 3Q2022.

When adjusted for the one-offs, bank's annualized return on equity would still reach solid 13.6%, or 8.31% when equity "adjusted" to 15% of risk-weighted assets: 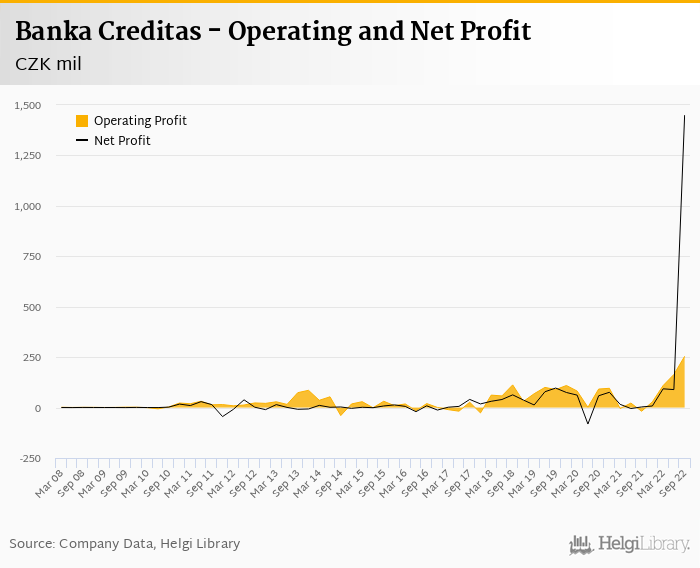 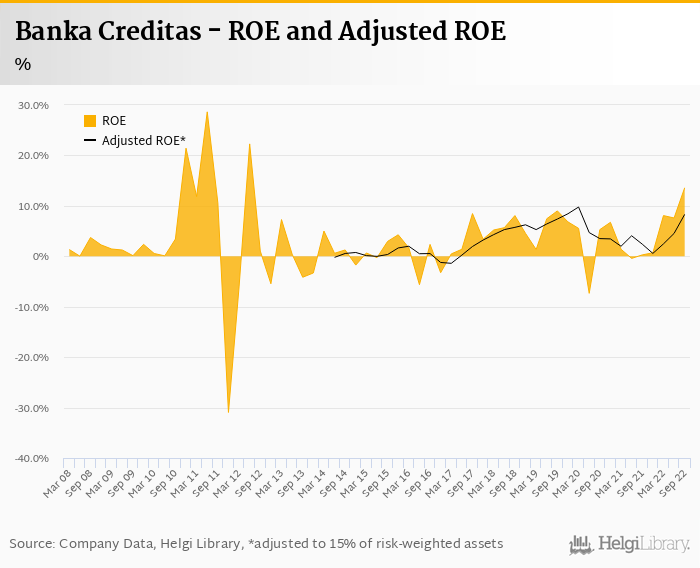 Record set of results on the back of a one-off gain most likely related to an acquisition of Expobank (now Max banka). Having said that, underlying revenues and operating profitability showed an impressive improvement driven by margin expansion as well as volume growth. Details on asset quality and capitalization will be interesting to watch for when detailed numbers for the year 2022 are released.