Loan to deposit ratio increased to 71.3% and capital adequacy might have decreased to 20.4%

Revenues increased 49.7% yoy to CZK 4,687 mil in the third quarter of 2022. The impressive growth has been driven mainly by acquisition of Equa Bank's assets and interest margin expansion as net interest margin increased  1.29 pp to 2.75% of total assets. Fee income grew 16.9% yoy and added a further 22.0% to total revenue while other income was negative or a third consecutive quarter. When compared to three years ago, revenues were up 65.4%: 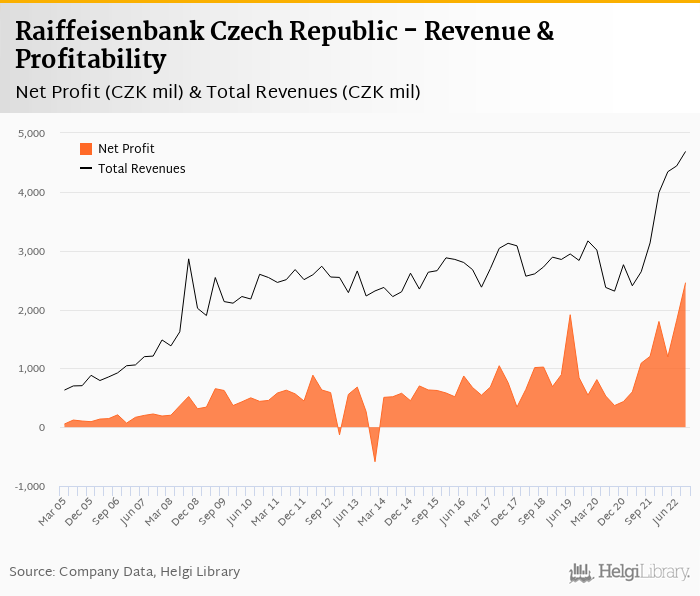 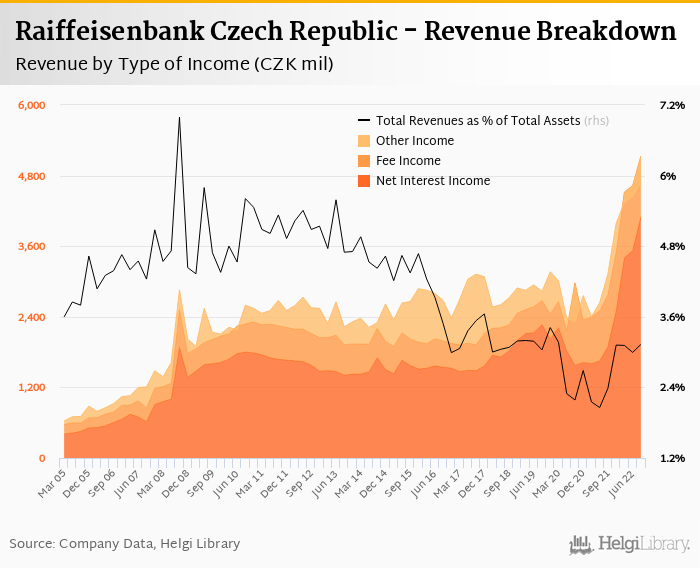 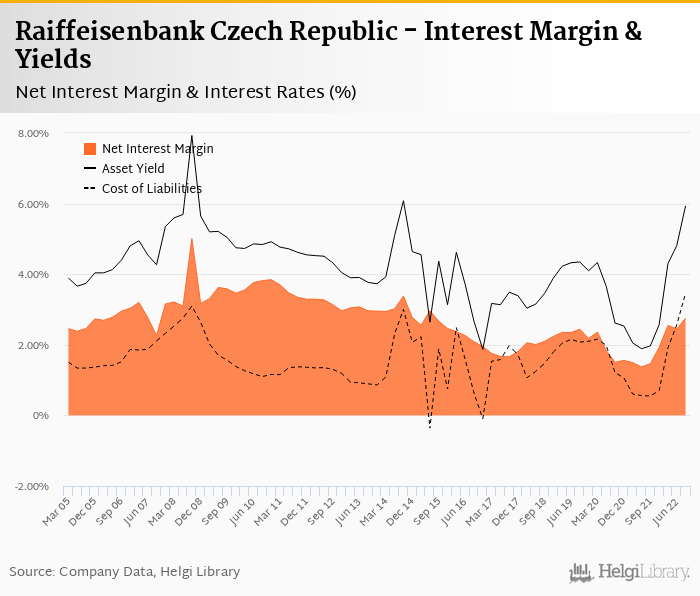 Costs increased by 26.0% yoy due partly to Equa Bank acquisiton, but the bank operated with solid cost to income of 45.8% in the last quarter. Staff cost rose 17.1% as the bank employed 3,384 persons (up 15.7% yoy) and paid CZK 98,082 per person per month including social and health care insurance cost: 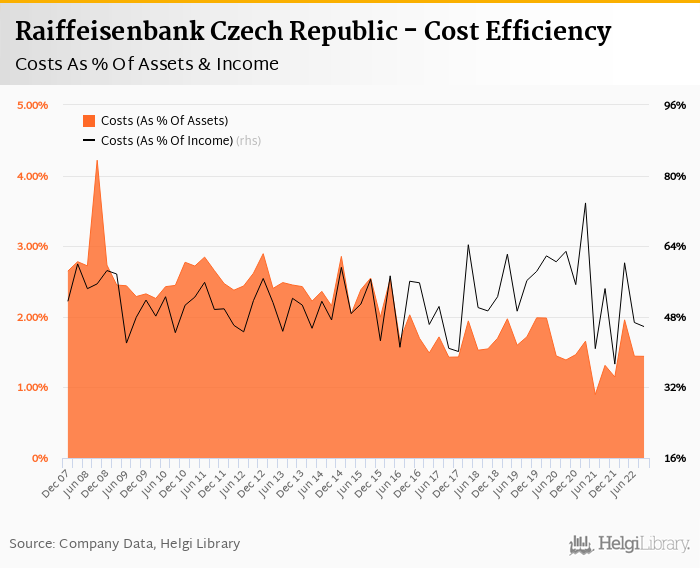 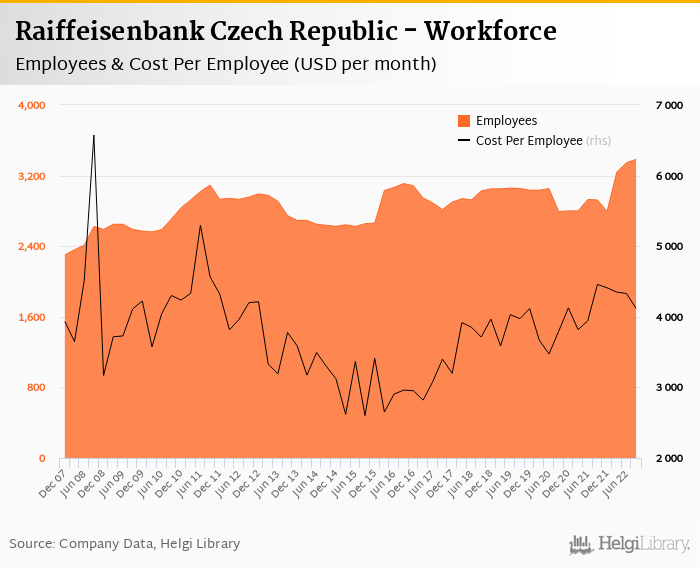 Raiffeisenbank Czech Republic's customer loans grew 2.56% qoq and 36% yoy in the third quarter of 2022 while customer deposit growth amounted to 1.70% qoq and 17.6% yoy. That’s compared to average of 15.7% and 19.5% average annual growth seen in the last three years. Again, large part of the annual increase is caused by the transfer of CZK 50+ bil loans from aquisition of Equa Bank.

At the end of third quarter of 2022, Raiffeisenbank Czech Republic's loans accounted for 71.3% of total deposits and 58.6% of total assets. 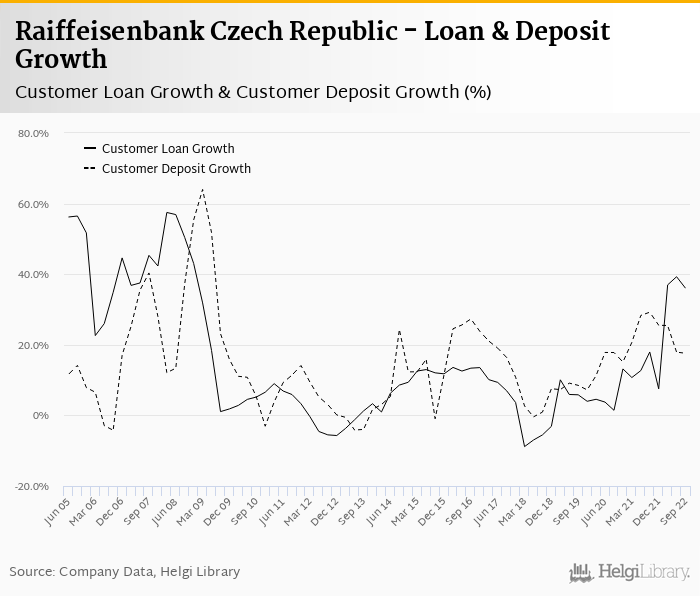 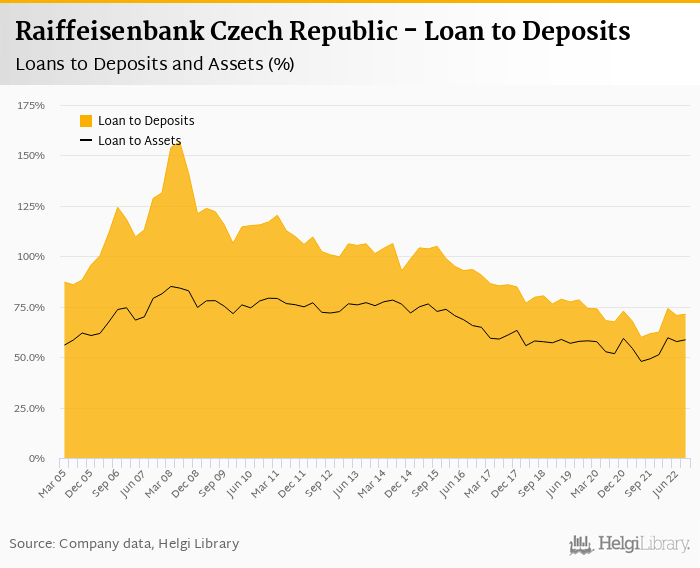 Retail loans grew 1.47% qoq and were 43.7% up yoy. Since Equa Bank's loan book was more retail-oriented than Raiffeisen's (two thirds of Equa Bank's loans were retail compared to less than half of Raiffeisen's),share of retail loans  increased to 49.6% of the loan book at the end of the third quarter. Mortgages represented 28.8% of the Raiffeisenbank Czech Republic's loan book, consumer loans added a further 20.8% and corporate loans formed 36.3% of total loans: 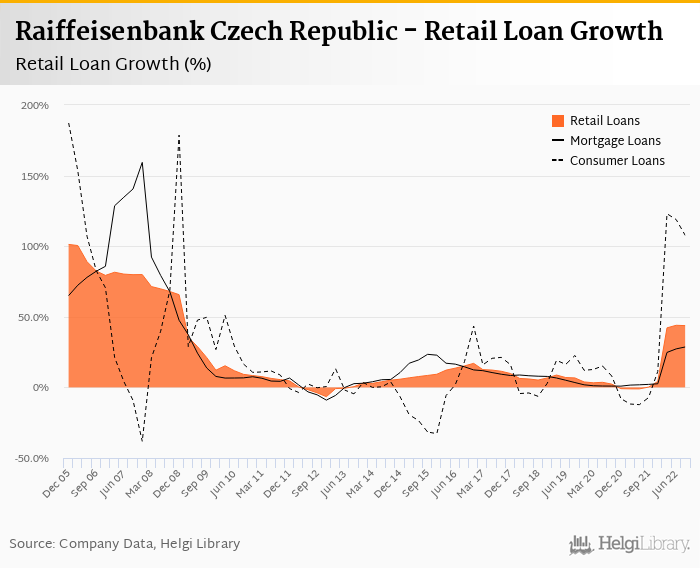 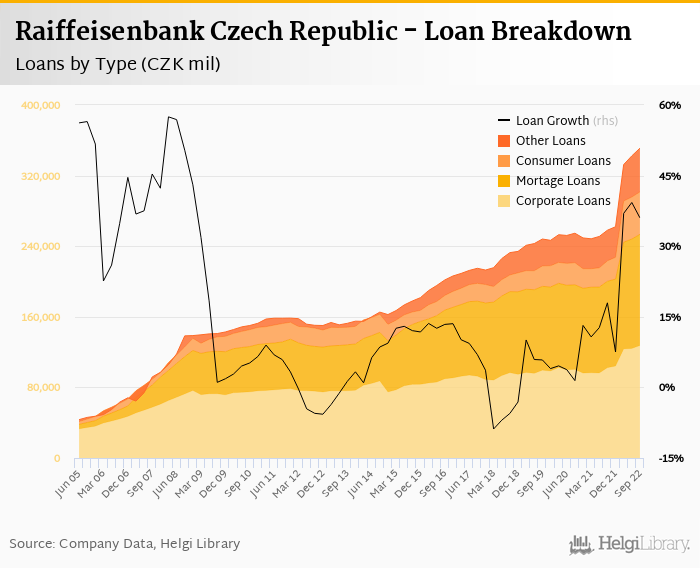 Acquisition of Equa Bank strenghtened Raiffeisen Bank's market position mainly in the area of retail banking. With more than 50,000 new customers, we estimate that the Bank has doubled its market share in consumer loans to over 10% and increased share in residential mortgages by 143 pp to more than 7.5%. Overall, we think the Bank was holding 8.64% of the loan market and 8.7% of the deposit market at the end of 3Q2022: 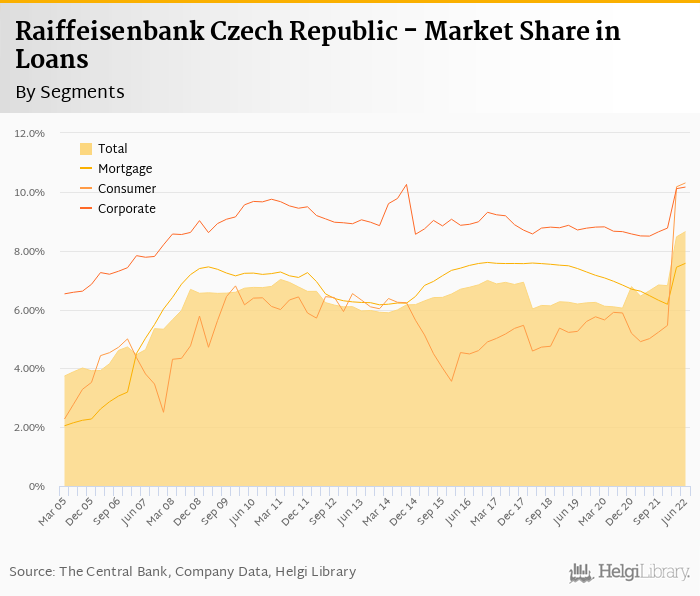 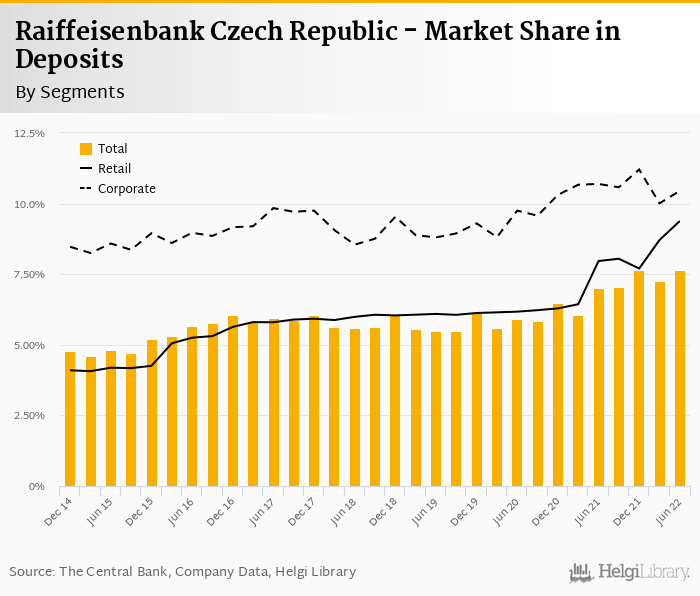 With little details provided in their 3Q22 results, we guesstimate Raiffeisenbank Czech Republic's non-performing loans reached 1.70-1.90% of total loans, down from 2.72% when compared to the previous year. Provisions might have covered some 55-65% of NPLs on our estimates at the end of the third quarter of 2022, up from 51.7% for the previous year.

The Bank has released CZK 519 mil worth of provisions into 3Q22 results boosting its porofitability and signalling high confidence regarding its asset quality development. Since this was the best quarterly result since the middle of 2019, we suspect this might be somewhat related to the aftermath of Equa Bank's acquisition: 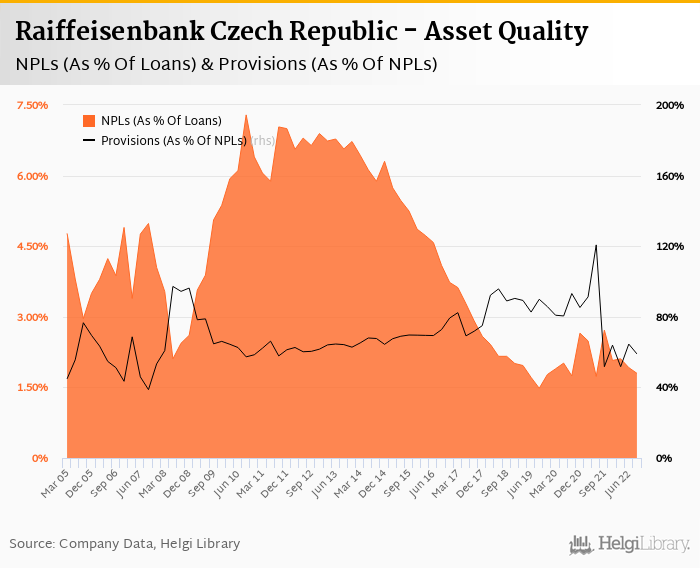 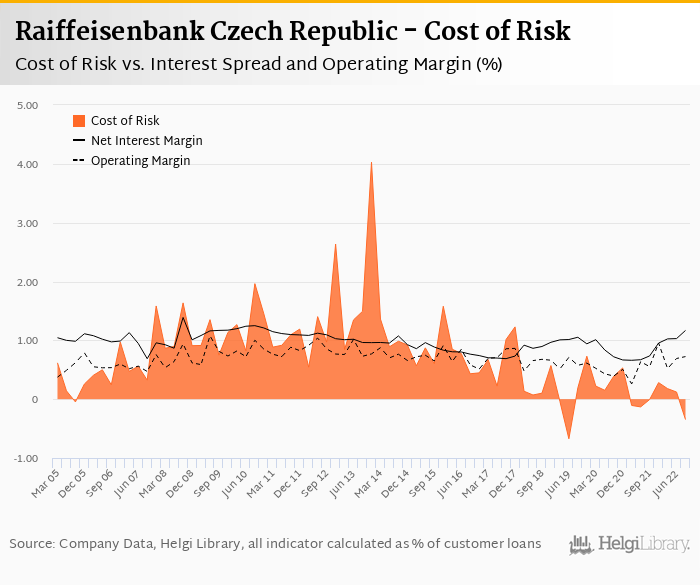 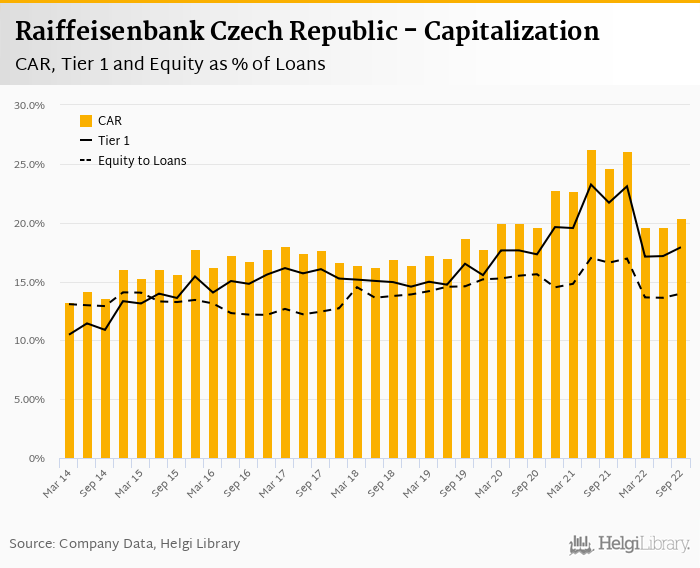 Overall, Raiffeisenbank Czech Republic made a record net profit of CZK 2,457 mil in the third quarter of 2022, up 104% yoy. This is a result of both, a strong operating profitability as well as a one-off release of provisions into profits. This means an annualized return on equity of 20.5%, or 23.1% when equity "adjusted" to 15% of risk-weighted assets: 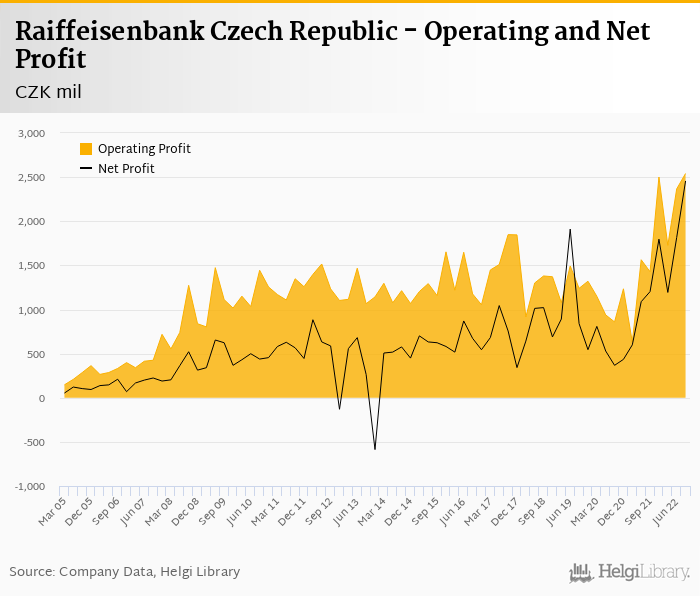 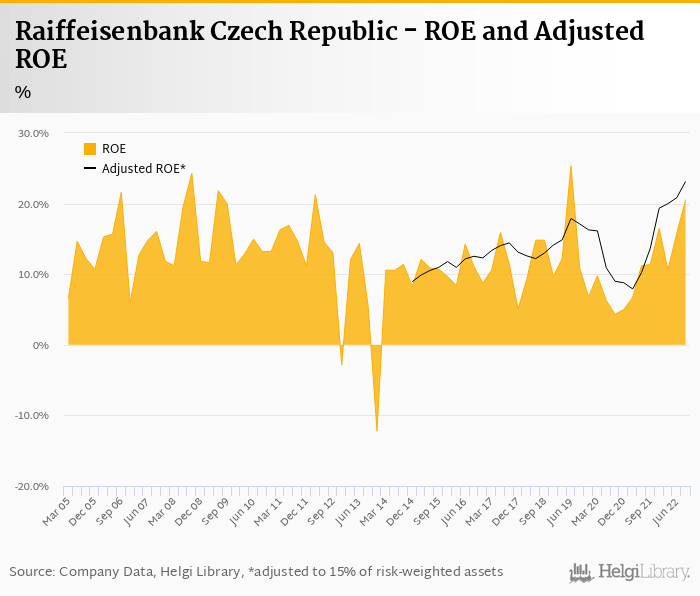 The Bank showed impressive set of results fuelled by strong operating performance and one-off gain from a release of provisions. Revenue side was heavily supported by interest margin expansion, while balance sheet was boosted by by the acquisition of Equa Bank's assets and customers. The Bank strenghtened its position mainly in the area of retail banking and consumer and mortgage loans in particular.