Home » Charts » What Country Spent The Most of GDP on Military in 2015?

What Country Spent The Most of GDP on Military in 2015? Global military spending has increased in real terms for the first time since the US began withdrawing troops from Iraq and Afghanistan, as reported by Emma Luxton on the World Economic Forum.

The report shows that most regions of the world have cut their military expenditure, with Africa having the biggest drop at more than 5%. North America and Latin America and the Caribbean reduced spending by around 2%.

Spending in Western and Central Europe was down 0.2% and has now fallen 8.5% since 2006. But expenditure in the Eastern European region (which includes Russia) went up 7.5% – the biggest increase of any region. Asia and Oceania also boosted spending by just over 5%.

The United States, despite a drop in 2015, is still the biggest global spender on its military, with a 2015 expenditure of almost $600 billion. This is considerably higher than the next biggest spender, China, which spent an estimated $215 billion on military.

When measuring military expenditure as a share of GDP, Saudi Arabia tops the list with 13.7% of its GDP. By comparison, the US spends only 3.3% of its GDP on the military, and China an estimated 1.9%. 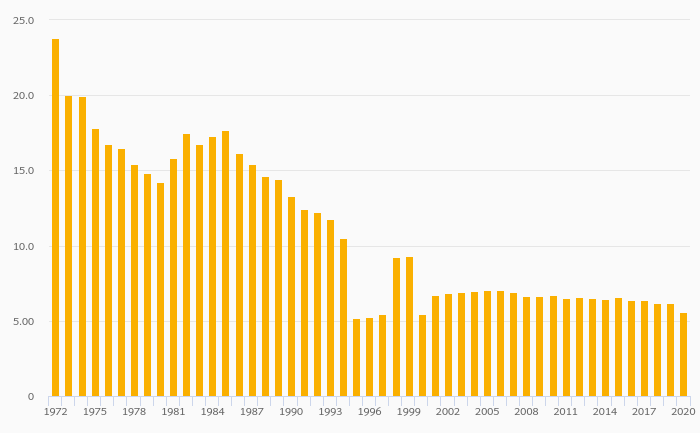 Military Expenditures (As % of Government Expenditure) rose to 6.08% in World in 2017