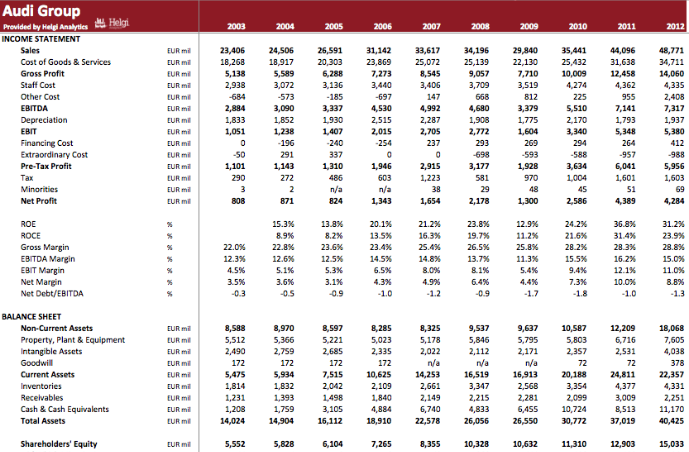 Audi is a German automobile manufacturer, from supermini to crossover SUVs in various body styles and price ranges that are marketed under the Audi brand, positioned as the premium brand within the Volkswagen Group. The company has its headquarters in Ingolstadt, Bavaria, Germany, and has been a wholly owned subsidiary of Volkswagen since 1966, following a phased purchase of its predecessor, Auto Union, from its former owner, Daimler-Benz. Volkswagen relaunched the Audi brand with the 1965 introduction of the Audi F103 series. The company name is based on the surname of the founder August Horch, his surname meaning 'listen' in German; when translated into Latin, it becomes Audi. The Audi Group comprises two brands Audi and Lamborghini. Through the acquisition of Ducati Motor Holding, the Audi Group has moreover since July 2012 been able to offer its customers motorcycles as well.

In addition, the excel file provides a summary concerning Audi Group's production and sales on its key markets including market share