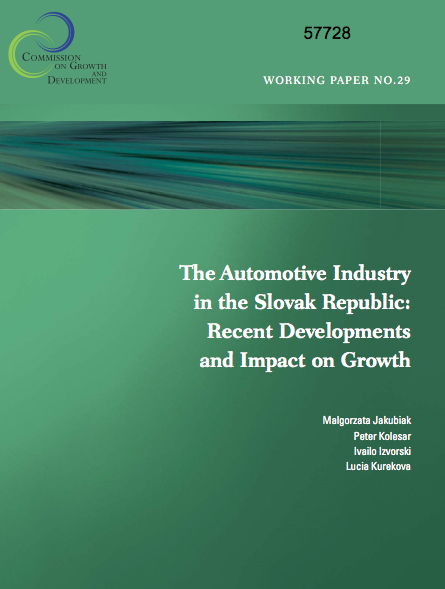 This paper analyzes recent automotive investments in the Slovak Republic and analyzes how these developments have affected growth in productivity and output. The paper presents conclusions on the motivations of investing in the Slovak Republic. To date, there have been three major foreign investments in the car industry in the Slovak Republic. Two of these started operations in 2003–04 and the third in 2006. The full impact of these investments will be felt only in the coming years, as output is planned to reach currently installed capacity only by 2010. Even today, though, the contribution of the automotive industry is large: it accounted for more than 40 percent of the increase in manufacturing employment during 2000–06 and for about one third of total Slovak exports in 2006.

The example of the Slovak Republic is worth studying because the country was regarded as a regional laggard in reform implementation and economic performance until 1997. Following the 1998 elections that brought a pro-reform government coalition to power, the country embarked on a path of economic reforms, with ambitious efforts in advancing privatization, corporate restructuring, and improvement of public service delivery. Building on these reforms the government advanced reforms of pensions and taxes, the labor code, social protection, and health care. All this took place together with a muchneeded consolidation in public finances and the reduction in inflation to low levels. At the same time, the Slovak Republic advanced European integration and acceded to the European Union (EU) in 2004. The government is likely to succeed in its plan to join the eurozone in 2009, earlier than its immediate neighbors.

The report argues that strong implementation and commitment to reforms, together with favorable initial conditions, have played a crucial role in attracting automotive investments to the Slovak Republic and made it possible for the investments to flourish. Generous investment incentives clearly have helped sway investor’s hands once a decision to invest regionally was made.