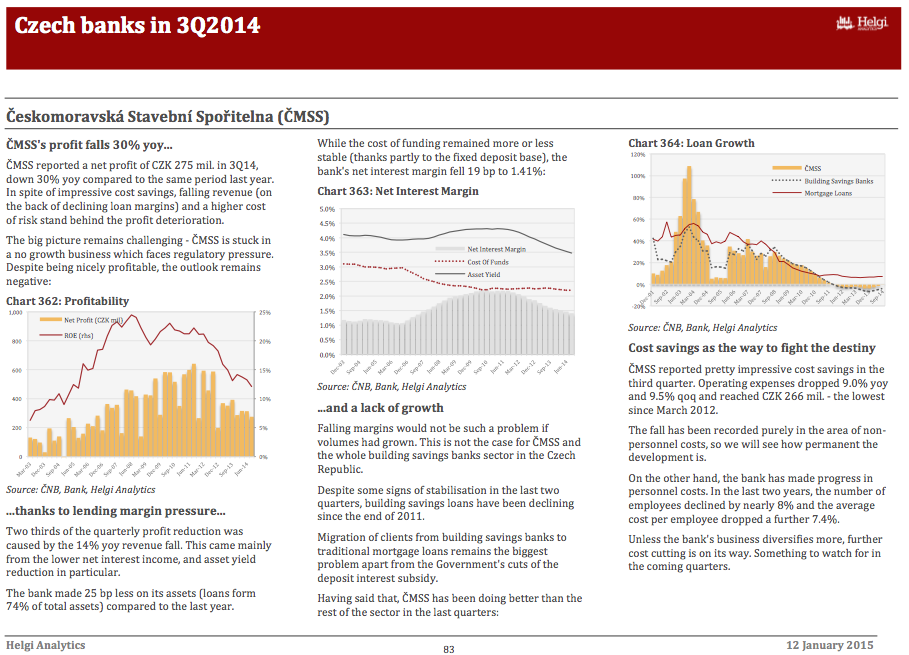 ČMSS reported a net profit of CZK 275 mil. in 3Q14, down 30% yoy compared to the same period last year. In spite of impressive cost savings, falling revenue (on the back of declining loan margins) and a higher cost of risk stand behind the profit deterioration.

The big picture remains challenging - ČMSS is stuck in a no growth business which faces regulatory pressure. Despite being nicely profitable, the outlook remains negative.

...thanks to lending margin pressure...

Two thirds of the quarterly profit reduction was caused by the 14% yoy revenue fall. This came mainly from the lower net interest income, and asset yield reduction in particular.

The bank made 25 bp less on its assets (loans form 74% of total assets) compared to the last year.

While the cost of funding remained more or less stable (thanks partly to the fixed deposit base), the bank's net interest margin fell 19 bp to 1.41%.

Falling margins would not be such a problem if volumes had grown. This is not the case for ČMSS and the whole building savings banks sector in the Czech Republic.

Despite some signs of stabilisation in the last two quarters, building savings loans have been declining since the end of 2011.

Migration of clients from building savings banks to traditional mortgage loans remains the biggest problem apart from the Government's cuts of the deposit interest subsidy.

Having said that, ČMSS has been doing better than the rest of the sector in the last quarters.

Cost savings as the way to fight the destiny

The fall has been recorded purely in the area of non-personnel costs, so we will see how permanent the development is.

On the other hand, the bank has made progress in personnel costs. In the last two years, the number of employees declined by nearly 8% and the average cost per employee dropped a further 7.4%.

Unless the bank's business diversifies more, further cost cutting is on its way. Something to watch for in the coming quarters.