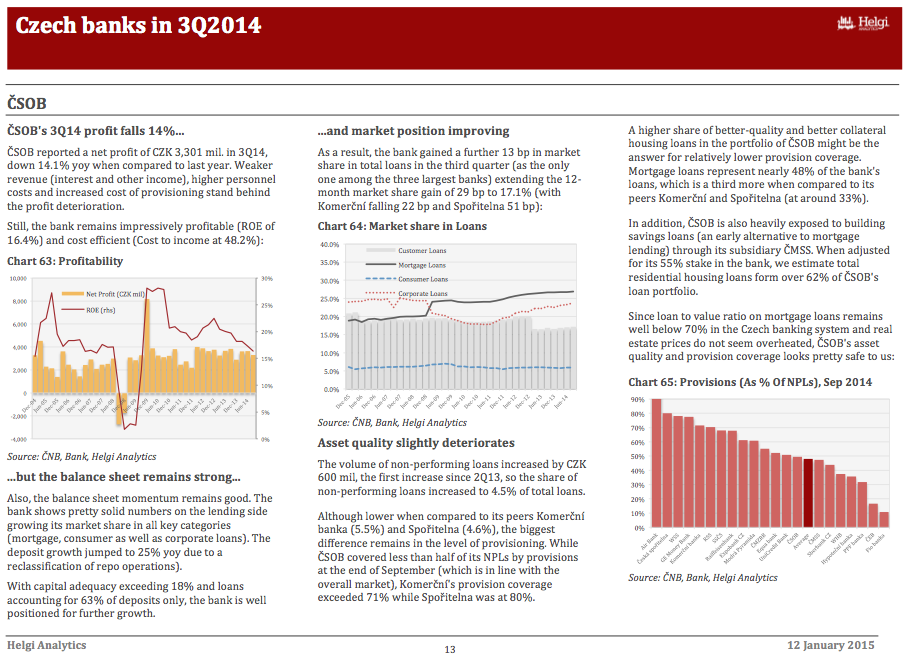 ČSOB reported a net profit of CZK 3,301 mil. in 3Q14, down 14.1% yoy when compared to last year. Weaker revenue (interest and other income), higher personnel costs and increased cost of provisioning stand behind the profit deterioration.

Still, the bank remains impressively profitable (ROE of 16.4%) and cost efficient (Cost to income at 48.2%).

...but the balance sheet remains strong...

Also, the balance sheet momentum remains good. The bank shows pretty solid numbers on the lending side growing its market share in all key categories (mortgage, consumer as well as corporate loans). The deposit growth jumped to 25% yoy due to a reclassification of repo operations).

With capital adequacy exceeding 18% and loans accounting for 63% of deposits only, the bank is well positioned for further growth.

As a result, the bank gained a further 13 bp in market share in total loans in the third quarter (as the only one among the three largest banks) extending the 12-month market share gain of 29 bp to 17.1% (with Komerční falling 22 bp and Spořitelna 51 bp):

Although lower when compared to its peers Komerční banka (5.5%) and Spořitelna (4.6%), the biggest difference remains in the level of provisioning. While ČSOB covered less than half of its NPLs by provisions at the end of September (which is in line with the overall market), Komerční's provision coverage exceeded 71% while Spořitelna was at 80%.

A higher share of better-quality and better collateral housing loans in the portfolio of ČSOB might be the answer for relatively lower provision coverage. Mortgage loans represent nearly 48% of the bank's loans, which is a third more when compared to its peers Komerční and Spořitelna (at around 33%).

In addition, ČSOB is also heavily exposed to building savings loans (an early alternative to mortgage lending) through its subsidiary ČMSS. When adjusted for its 55% stake in the bank, we estimate total residential housing loans form over 62% of ČSOB's loan portfolio.

Since loan to value ratio on mortgage loans remains well below 70% in the Czech banking system and real estate prices do not seem overheated, ČSOB's asset quality and provision coverage looks pretty safe to us.