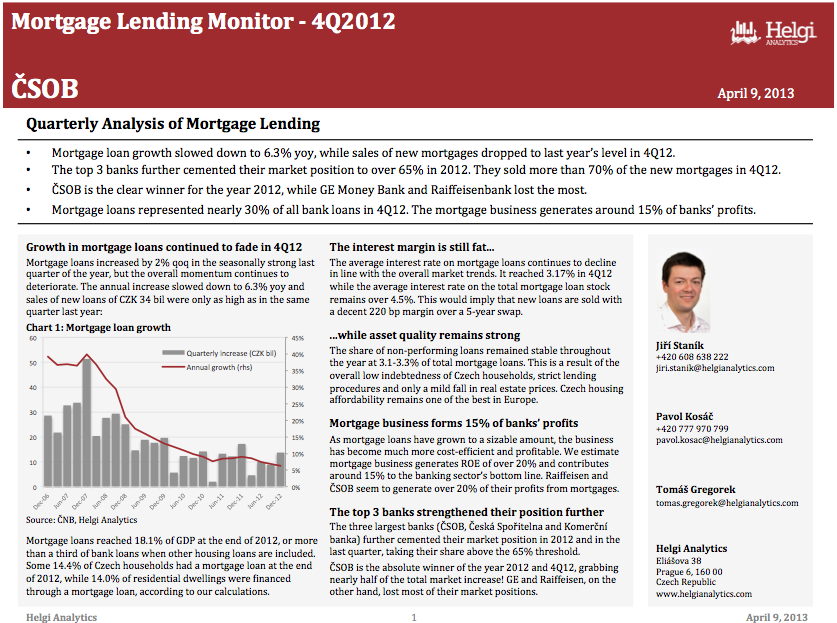 This report focuses specifically on development in CSOB in the 4Q2012. The key highlights are:

The bank still grows faster than the market...

The bank has been gaining market share in mortgage loans since the middle of 2006, when it held only a 18.4% share. Thanks partly to the conservative approach of Komerční and the resignation of Spořitelna from mortgage lending in 2008-2010, ČSOB increased its market share to 26.2% as of the end of 2012!

However great the year 2012 was, there are a few clouds gathering on the horizon, in our view. First, the number of new mortgage loans and the number of mortgage contracts sold by ČSOB in 4Q12 was lower than in the same period in 2011. Second, Česká Spořitelna outperformed ČSOB in mortgage sales in 4Q (for the second quarter that year), so competitive pressure from ČSOB’s largest enemy is clearly rising after a few years of hibernation.

This is less than the 24% we calculated for Raiffeisen, but much more than the 14% of Komerční Banka and the 12% we estimate for Česká Spořitelna.