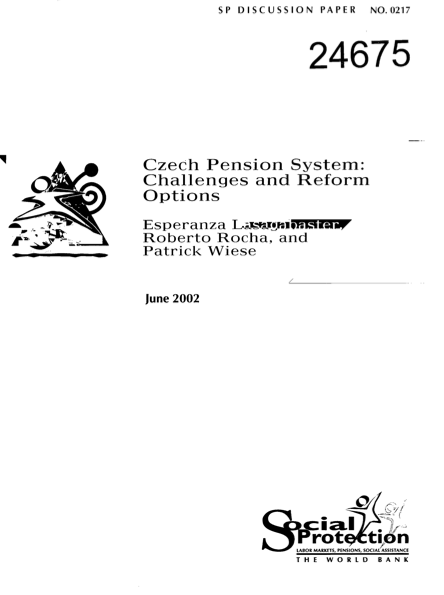 Like most European nations, the Czech Republic is in the midst of a demographic transformation that will have a severe impact on the performance of its pension system, which is primarily a public defined benefit (DB) system financed on a pay-as-you-go (PAYG) basis. The extent of future demographic pressures can be clearly appreciated by the projected path of the old age dependency ratio (the ratio of the elderly population to the working-age population). The dependency ratio is currently 30 percent, but is projected to increase to 50 percent by 2025 and to more than 80 percent by 2050. Given the extraordinary magnitude of this pressure, pension reform will be unavoidable.

The purpose of this paper is to review the structure and performance of the Czech pension system and examine alternative reform options. The paper is structured as follows. The second section reviews the structure and performance of the PAYG system and assesses how the system will evolve in the absence of fundamental reform. The third section examines the main PAYG reform options, including a parametric DB reform and the introduction of a system of notional defined contributions (NDC). The fourth section reviews the structure and recent performance of the voluntary private funded system and examines the options to increase coverage and improve its performance. The fifth section assesses the limitations of a reform strategy restricted to the voluntary pillar and the impact of a more comprehensive multi-pillar reform, including reforms to the public PAYG scheme combined with the introduction of a modest but mandatory funded pillar. The sixth and final section summarizes the analysis and provides some concluding thoughts.