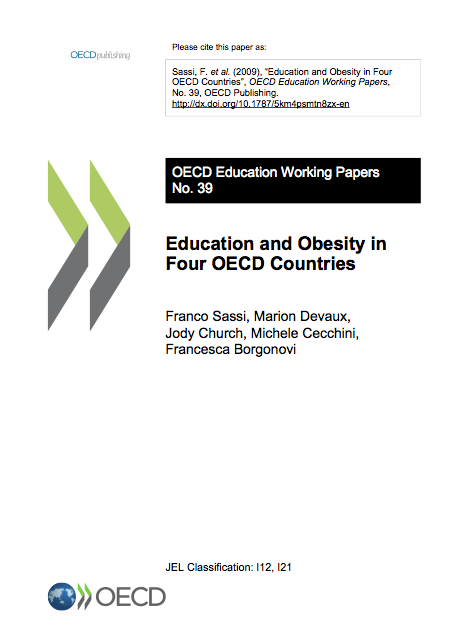 Language: English
Provider: OECD
Pages: 49
An epidemic of obesity has been developing in virtually all OECD countries over the last 30 years. Existing evidence provides strong suggestions that such epidemic has affected certain social groups more than others. In particular, education appears to be associated with a lower likelihood of obesity, especially among women. A range of analyses of health survey data from Australia, Canada, England and Korea were undertaken with the aim of exploring the relationship between education and obesity. The findings of these analyses show a broadly linear relationship between the number of years spent in full-time education and the probability of obesity, with most educated individuals displaying lower rates of the condition (the only exception being men in Korea). This suggests that marginal returns to education, in terms of reduction in obesity rates, are approximately constant throughout the education spectrum. The findings obtained confirm that the education gradient in obesity is stronger in women than in men. Differences between genders are minor in Australia and Canada, more pronounced in England and major in Korea. The causal nature of the link between education and obesity has not yet been proven with certainty; however, using data from France we were able to ascertain that the direction of causality appears to run mostly from education to obesity, as the strength of the association is only minimally affected when accounting for reduced educational opportunities for those who are obese in young age. Most of the effect of education on obesity is direct. Small components of the overall effect of education on obesity are mediated by an improved socio-economic status linked to higher levels of education, and by a higher level of education of other family members, associated with an individual’s own level of education. The positive effect of education on obesity is likely to be determined by at least three factors: (a) greater access to health-related information and improved ability to handle such information; (b) clearer perception of the risks associated with lifestyle choices; and, (c) improved self-control and consistency of preferences over time. However, it is not just the absolute level of education achieved by an individual that matters, but also how such level of education compares with that of the individual’s peers. The higher the individual’s education relative to his or her peers’, the lower is the probability of the individual being obese.
Education | Australia | December 14, 2009
Download
Excel Sheet, 49 pages