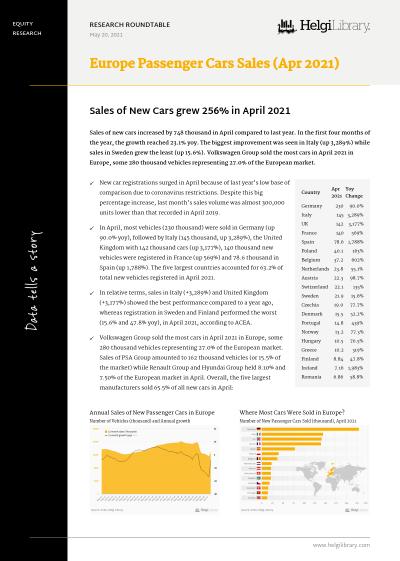 Sales of new cars increased by 748 thousand in April compared to last year. In the first four months of the year, the growth reached 23.1% yoy . The smallest decline was seen in Italy (3,289%) while sales in Sweden dropped the most (15.6%). Volkswagen Group sold the most cars in April 2021 in Europe, some 280 thousand vehicles representing 27.0% of the European market.

New car registrations surged in April because of last year’s low base of comparison due to coronavirus restrictions. Despite this big percentage increase, last month’s sales volume was almost 300,000 units lower than that recorded in April 2019.

Volkswagen Group sold the most cars in April 2021 in Europe, some 280 thousand vehicles representing 27.0% of the European market. Sales of PSA Group amounted to 162 thousand vehicles (or 15.5% of the market) while Renault Group and Hyundai Group held 8.10% and 7.50% of the European market in April. Overall, the five largest manufacturers sold 65.5% of all new cars in April.