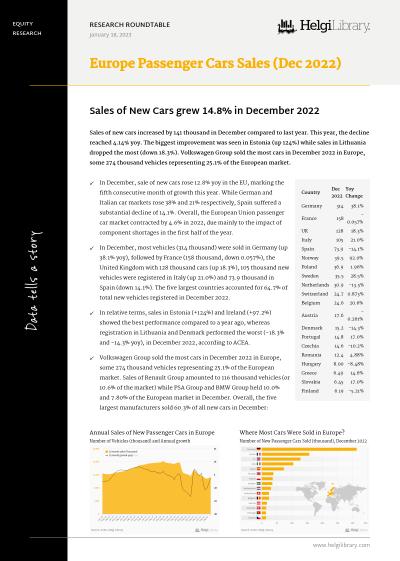 Sales of new cars increased by 141 thousand in December compared to last year. This year, the decline reached 4.14% yoy . The smallest decline was seen in Estonia (124%) while sales in Lithuania dropped the most (-18.3%). Volkswagen Group sold the most cars in December 2022 in Europe, some 274 thousand vehicles representing 25.1% of the European market.

In December, sale of new cars rose 12.8% yoy in the EU, marking the fifth consecutive month of growth this year. While German and Italian car markets rose 38% and 21% respectively, Spain suffered a substantial decline of 14.1%. Overall, the European Union passenger car market contracted by 4.6% in 2022, due mainly to the impact of component shortages in the first half of the year.