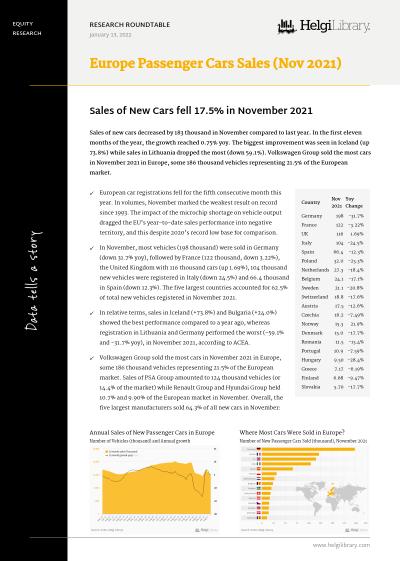 Sales of new cars decreased by 183 thousand in November compared to last year. In the first eleven months of the year, the growth reached 0.75% yoy . The smallest decline was seen in Iceland (73.8%) while sales in Lithuania dropped the most (-59.1%). Volkswagen Group sold the most cars in November 2021 in Europe, some 186 thousand vehicles representing 21.5% of the European market.

European car registrations fell for the fifth consecutive month this year. In volumes, November marked the weakest result on record since 1993. The impact of the microchip shortage on vehicle output dragged the EU’s year-to-date sales performance into negative territory, and this despite 2020’s record low base for comparison.