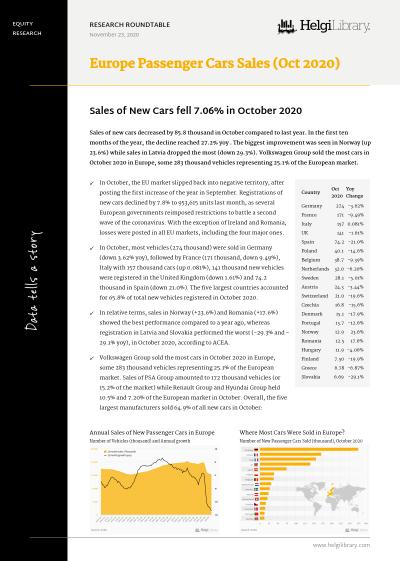 Sales of new cars decreased by 85.8 thousand in October compared to last year. In the first ten months of the year, the decline reached 27.2% yoy . The smallest decline was seen in Norway (23.6%) while sales in Latvia dropped the most (-29.3%). Volkswagen Group sold the most cars in October 2020 in Europe, some 283 thousand vehicles representing 25.1% of the European market.

In October, the EU market slipped back into negative territory, after posting the first increase of the year in September. Registrations of new cars declined by 7.8% to 953,615 units last month, as several European governments reimposed restrictions to battle a second wave of the coronavirus. With the exception of Ireland and Romania, losses were posted in all EU markets, including the four major ones.