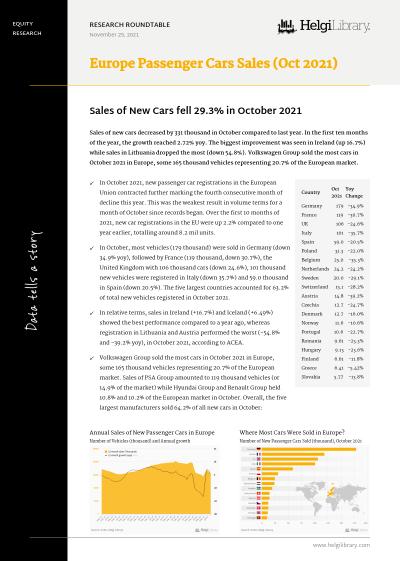 Sales of new cars decreased by 331 thousand in October compared to last year. In the first ten months of the year, the growth reached 2.72% yoy . The smallest decline was seen in Ireland (16.7%) while sales in Lithuania dropped the most (-54.8%). Volkswagen Group sold the most cars in October 2021 in Europe, some 165 thousand vehicles representing 20.7% of the European market.

In October 2021, new passenger car registrations in the European Union contracted further marking the fourth consecutive month of decline this year. This was the weakest result in volume terms for a month of October since records began. Over the first 10 months of 2021, new car registrations in the EU were up 2.2% compared to one year earlier, totalling around 8.2 mil units.