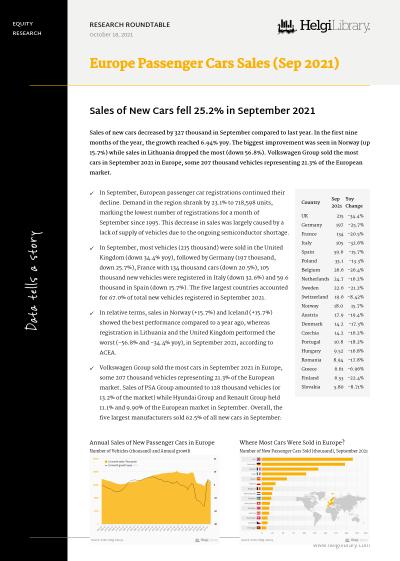 Sales of new cars decreased by 327 thousand in September compared to last year. In the first nine months of the year, the growth reached 6.94% yoy . The smallest decline was seen in Norway (15.7%) while sales in Lithuania dropped the most (-56.8%). Volkswagen Group sold the most cars in September 2021 in Europe, some 207 thousand vehicles representing 21.3% of the European market.

In September, European passenger car registrations continued their decline. Demand in the region shrank by 23.1% to 718,598 units, marking the lowest number of registrations for a month of September since 1995. This decrease in sales was largely caused by a lack of supply of vehicles due to the ongoing semiconductor shortage.