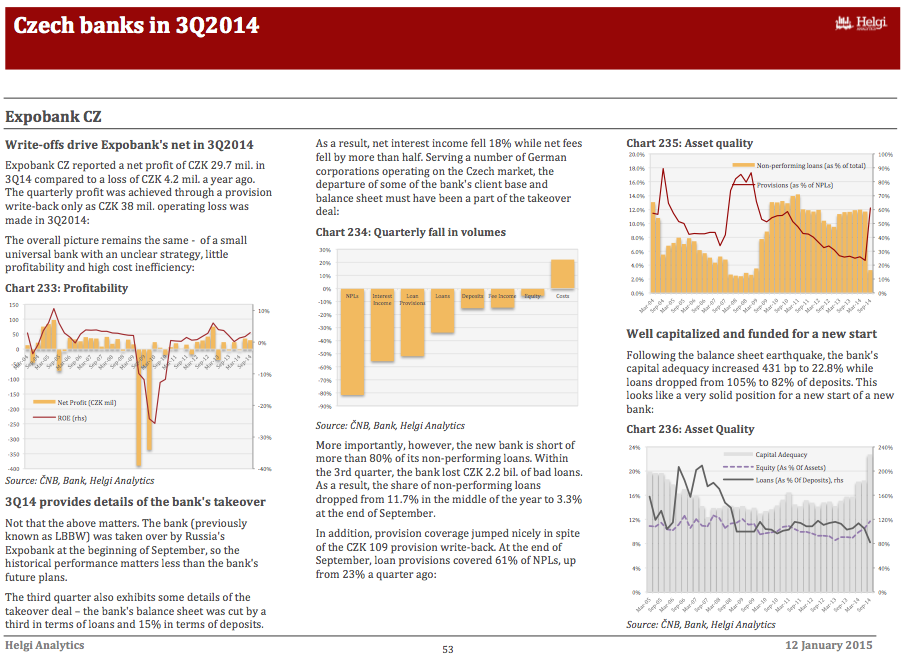 Expobank CZ reported a net profit of CZK 29.7 mil. in 3Q14 compared to a loss of CZK 4.2 mil. a year ago. The quarterly profit was achieved through a provision write-back only as CZK 38 mil. operating loss was made in 3Q2014.

The overall picture remains the same -  of a small universal bank with an unclear strategy, little profitability and high cost inefficiency.

Not that the above matters. The bank (previously known as LBBW) was taken over by Russia's Expobank at the beginning of September, so the historical performance matters less than the bank's future plans.

The third quarter also exhibits some details of the takeover deal – the bank's balance sheet was cut by a third in terms of loans and 15% in terms of deposits. As a result, net interest income fell 18% while net fees fell by more than half. Serving a number of German corporations operating on the Czech market, the departure of some of the bank's client base and balance sheet must have been a part of the takeover deal:

More importantly, however, the new bank is short of more than 80% of its non-performing loans. Within the 3rd quarter, the bank lost CZK 2.2 bil. of bad loans. As a result, the share of non-performing loans dropped from 11.7% in the middle of the year to 3.3% at the end of September.

In addition, provision coverage jumped nicely in spite of the CZK 109 provision write-back. At the end of September, loan provisions covered 61% of NPLs, up from 23% a quarter ago.

Well capitalized and funded for a new start

Following the balance sheet earthquake, the bank's capital adequacy increased 431 bp to 22.8% while loans dropped from 105% to 82% of deposits. This looks like a very solid position for a new start of a new bank.