Foreign and Local Banks in Hungary – Before and After the Crisis 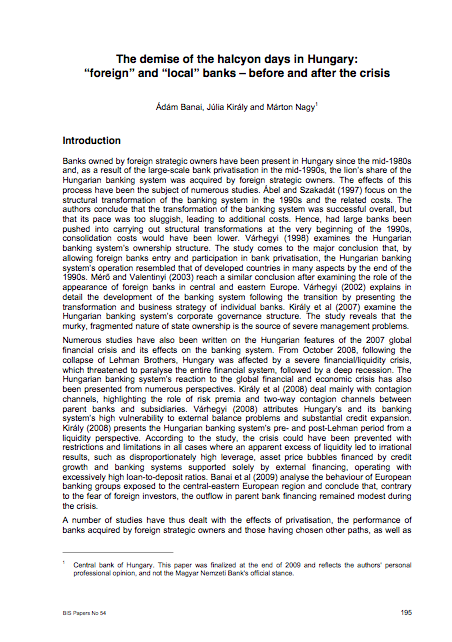 Language: English
Provider: BIS
Pages: 30
Banks owned by foreign strategic owners have been present in Hungary since the mid-1980s and, as a result of the large-scale bank privatisation in the mid-1990s, the lion’s share of the Hungarian banking system was acquired by foreign strategic owners. The effects of this process have been the subject of numerous studies. Ábel and Szakadát (1997) focus on the structural transformation of the banking system in the 1990s and the related costs. The authors conclude that the transformation of the banking system was successful overall, but that its pace was too sluggish, leading to additional costs. Hence, had large banks been pushed into carrying out structural transformations at the very beginning of the 1990s, consolidation costs would have been lower. Várhegyi (1998) examines the Hungarian banking system’s ownership structure. The study comes to the major conclusion that, by allowing foreign banks entry and participation in bank privatisation, the Hungarian banking system’s operation resembled that of developed countries in many aspects by the end of the 1990s. Mérő and Valentinyi (2003) reach a similar conclusion after examining the role of the appearance of foreign banks in central and eastern Europe. Várhegyi (2002) explains in detail the development of the banking system following the transition by presenting the transformation and business strategy of individual banks. Király et al (2007) examine the Hungarian banking system’s corporate governance structure. The study reveals that the murky, fragmented nature of state ownership is the source of severe management problems.
Banking | Hungary | January 24, 2010
Download
Excel Sheet, 30 pages