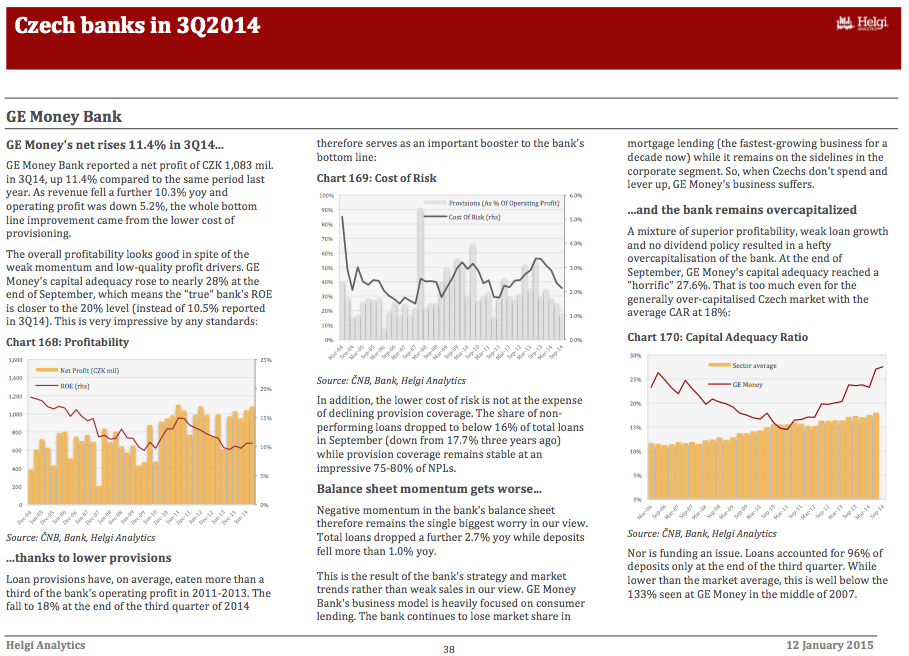 GE Money Bank reported a net profit of CZK 1,083 mil. in 3Q14, up 11.4% compared to the same period last year. As revenue fell a further 10.3% yoy and operating profit was down 5.2%, the whole bottom line improvement came from the lower cost of provisioning.

The overall profitability looks good in spite of the weak momentum and low-quality profit drivers. GE Money's capital adequacy rose to nearly 28% at the end of September, which means the "true" bank's ROE is closer to the 20% level (instead of 10.5% reported in 3Q14). This is very impressive by any standards.

...thanks to lower provisions

Loan provisions have, on average, eaten more than a third of the bank's operating profit in 2011-2013. The fall to 18% at the end of the third quarter of 2014 therefore serves as an important booster to the bank's bottom line:

In addition, the lower cost of risk is not at the expense of declining provision coverage. The share of non-performing loans dropped to below 16% of total loans in September (down from 17.7% three years ago) while provision coverage remains stable at an impressive 75-80% of NPLs.

This is the result of the bank's strategy and market trends rather than weak sales in our view. GE Money Bank's business model is heavily focused on consumer lending. The bank continues to lose market share in mortgage lending (the fastest-growing business for a decade now) while it remains on the sidelines in the corporate segment. So, when Czechs don't spend and lever up, GE Money's business suffers.

...and the bank remains overcapitalized

A mixture of superior profitability, weak loan growth and no dividend policy resulted in a hefty overcapitalisation of the bank. At the end of September, GE Money's capital adequacy reached a "horrific" 27.6%. That is too much even for the generally over-capitalised Czech market with the average CAR at 18%:

Nor is funding an issue. Loans accounted for 96% of deposits only at the end of the third quarter. While lower than the market average, this is well below the 133% seen at GE Money in the middle of 2007.