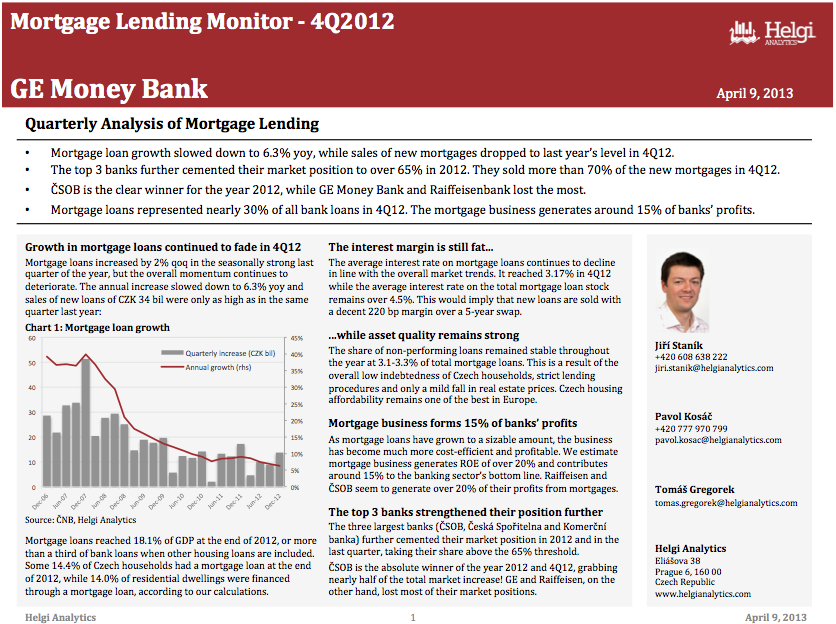 This report focuses specifically on development in GE Money Bank Czech Republic in the 4Q2012. The key highlights are:

As part of its global strategy, the Czech Republic’s GE Money Bank continues to retreat from mortgage lending. In 4Q,  mortgage loans dropped a further 3.5% qoq, while the annual reduction deepened to 7.4% yoy in 2012. That is compared to a market which grew 2% qoq and 6.3% yoy.

GE Money Bank remains one of the few banks on the Czech market which continues not only to lose market share, but also to reduce its mortgage loan portfolio. From having 5.7% of the mortgage market in March 2007, the bank was holding only 2.8% of the total at the end of 2012. In addition, GE Money’s mortgage loan book has dropped 22% since the end of 2008, while the market has grown 43.5% during the same period.

In terms of new production, the bank sold 1.6% of the new mortgages generated on the market in 2012. The momentum continues to deteriorate as 4Q sales imply a further reduction to only 1.3% of the total number of mortgage loans sold.

Residential mortgage loans represented more than a fifth of GE Money’s total loans at the end of 2012. Although this is 7% lower than five years ago, it is still a third higher than at UniCredit Bank in relative terms, for example.

When Hypoteční banka’s financials are taken as a benchmark, we believe mortgage lending business generates around 6% of GE Money’s overall profitability now.