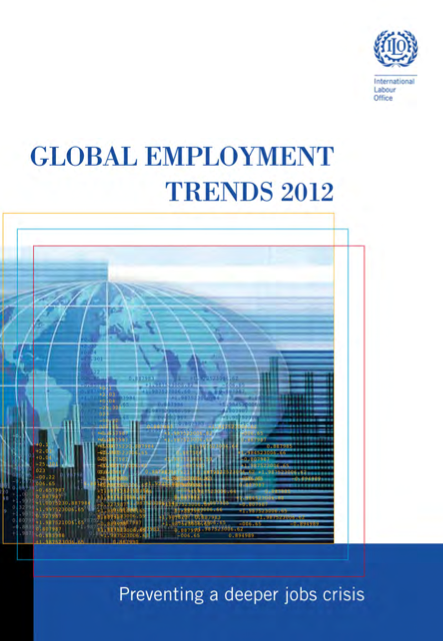 Global Employment Trends 2012 highlights how the crisis is increasingly raising trend unemployment rates, partly driven by sectoral shifts of jobs that had been triggered by the crisis. Despite historically low interest rates in many advanced economies, investment and employment have not shown tangible signs of recovery. Depressed growth prospects have started to spread to the developing world, where low productivity and wage growth continues to remain an issue in most regions, preventing improvements in employment and disposable incomes, in particular among poorer countries, and adding to a rise in global inequality. The report argues that in countries with high and rising unemployment, job guarantee programmes for targeted labour market groups should be the preferred policy measure. Moreover, rising labour market discouragement and structural unemployment should be tackled with new skills and training initiatives to help jobseekers find employment in alternative industries and to promote their employability more broadly. Other possible areas of intervention are further investments in public infrastructure in developing countries and a swift implementation of financial market regulation to help stabilize the macroeconomic environment and stimulate job creation. Copyright © International Labour Organization
Labour | World | January 22, 2012
Download
Excel Sheet, 121 pages

An Analysis of Skill Mismatch Using Direct Measures of Skills

Download
The Effects Of Working Time On Productivity And Firm Performance

Download
Income Inequality As A Cause Of The Great Recession?

Download
Maternity At Work: A Review Of National Legislation

Download
Children in hazardous work: What we know, what we need to do