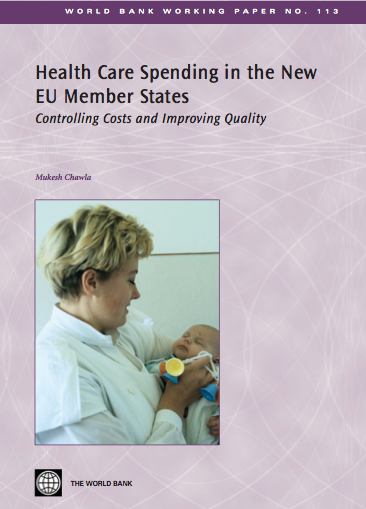 Following the transition from central planning toward market-based economies, the EU8 countries (Czech Republic, Estonia,Hungary, Latvia, Lithuania, Poland, Slovakia, and Slovenia) introduced a number of reforms in the finance, management, and organization of the health sector. Reforms removed the state monopoly on healthcare by privatization and decentralization, and started the process of establishing an economic relationship between the healthcare provider and the patient through changes in healthcare financing.

Almost all countries adopted the Bismarckian social health insurance model, and in all cases one or more Social Health Insurance Agencies started operating independently of the state budget. In most countries, subsequent reforms also addressed the pharmaceutical sector, and brought about changes in the health financing structure in an effort to address the manifold problems brought about by the insurance system. However, reforms have generally been less successful in securing sustainability of health care financing, improving efficiency, enhancing equity in healthcare financing and delivery, and managing the quality of health services. The study by Mukesh Chawla and Marzena Kulis takes stock of recent trends in health expenditure and discusses directions for reform consistent with the objectives of stabilizing the fiscal situation in these countries without adversely affecting the production, delivery and utilization of health services.

EU8 countries have generally been successful in safeguarding resources for the health sector and a reasonable health status of their people. Total spending on health in the EU8 countries is at levels roughly commensurate with per capita GDP in these countries, and is not out of line with other European countries and high-performing middle income countries. In some EU8 countries like Estonia and Latvia, however, health spending is on the low side relative to per capita GDP. The health status of the people in the EU8 countries is at levels commensurate with their levels of health spending and income, but is generally poor compared to the EU15. The difference between the EU15 and EU8 average life expectancy has decreased in recent years, but most EU8 countries have some five years shorter life expectancy than the EU15 average.