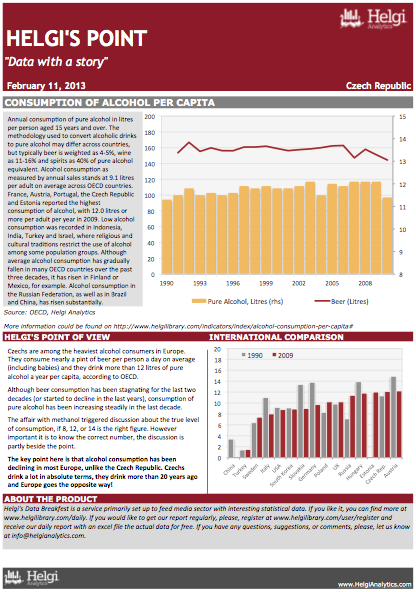 Czechs are among the heaviest alcohol consumers in Europe. They consume nearly a pint of beer per person a day on average (including babies) and they drink more than 12 litres of pure alcohol a year per capita, according to OECD. Although beer consumption has been stagnating for the last two decades (or started to decline in the last years), consumption of pure alcohol has been increasing steadily in the last decade. The affair with methanol triggered discussion about the true level of consumption, if 8, 12, or 14 is the right figure. However important it is to know the correct number, the discussion is partly beside the point. The key point here is that alcohol consumption has been declining in most Europe, unlike the Czech Republic. Czechs drink a lot in absolute terms, they drink more than 20 years ago and Europe goes the opposite way!
Society | Czech Republic | February 10, 2013
Download
Excel Sheet, 1 pages