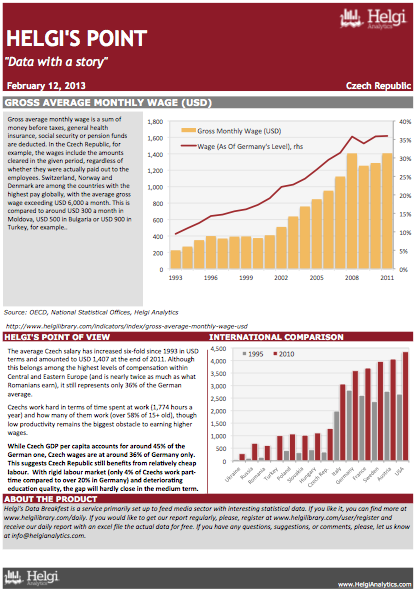 The average Czech salary has increased six-fold since 1993 in USD terms and amounted to USD 1,407 at the end of 2011. Although this belongs among the highest levels of compensation within Central and Eastern Europe (and is nearly twice as much as what Romanians earn), it still represents only 36% of the German average. Czechs work hard in terms of time spent at work (1,774 hours a year) and how many of them work (over 58% of 15+ old), though low productivity remains the biggest obstacle to earning higher wages. While Czech GDP per capita accounts for around 45% of the German one, Czech wages are at around 36% of Germany only. This suggests Czech Republic still benefits from relatively cheap labour. With rigid labour market (only 4% of Czechs work part-time compared to over 20% in Germany) and deteriorating education quality, the gap will hardly close in the medium term
Economy | Czech Republic | February 11, 2013
Download
Excel Sheet, 1 pages