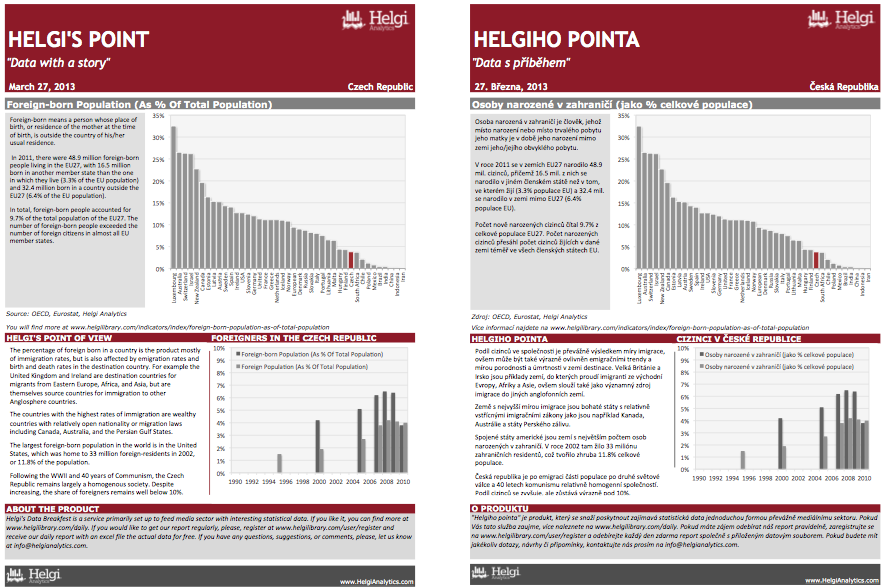 Language: Czech / English
Provider: 2013
Pages: 1
The percentage of foreign born in a country is the product mostly of immigration rates, but is also affected by emigration rates and birth and death rates in the destination country. For example the United Kingdom and Ireland are destination countries for migrants from Eastern Europe, Africa, and Asia, but are themselves source countries for immigration to other Anglosphere countries. The countries with the highest rates of immigration are wealthy countries with relatively open nationality or migration laws including Canada, Australia, and the Persian Gulf States. The largest foreign-born population in the world is in the United States, which was home to 33 million foreign-residents in 2002, or 11.8% of the population. Following the WWII and 40 years of Communism, the Czech Republic remains largely a homogenous society. Despite increasing, the share of foreigners remains well below 10%.
Society | World | March 26, 2013
Download
Excel Sheet, 1 pages

Download
Helgi's Point - The Largest Armies in The World

Download
How Are School Systems Adapting to Increasing Numbers of Immigrant Students?