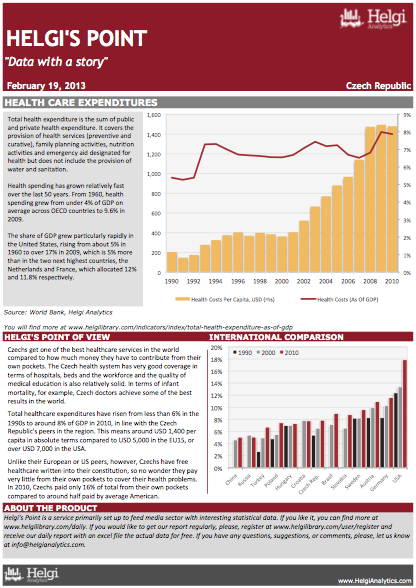 Language: Czech / English
Provider: 2013
Pages: 1
Czechs get one of the best healthcare services in the world compared to how much money they have to contribute from their own pockets. The Czech health system has very good coverage in terms of hospitals, beds and the workforce and the quality of medical education is also relatively solid. In terms of infant mortality, for example, Czech doctors achieve some of the best results in the world. Total healthcare expenditures have risen from less than 6% in the 1990s to around 8% of GDP in 2010, in line with the Czech Republic's peers in the region. This means around USD 1,400 per capita in absolute terms compared to USD 5,000 in the EU15, or over USD 7,000 in the USA. Unlike their European or US peers, however, Czechs have free healthcare written into their constitution, so no wonder they pay very little from their own pockets to cover their health problems. In 2010, Czechs paid only 16% of total from their own pockets compared to around half paid by average American.
Health Care | Czech Republic | February 18, 2013
Download
Excel Sheet, 1 pages