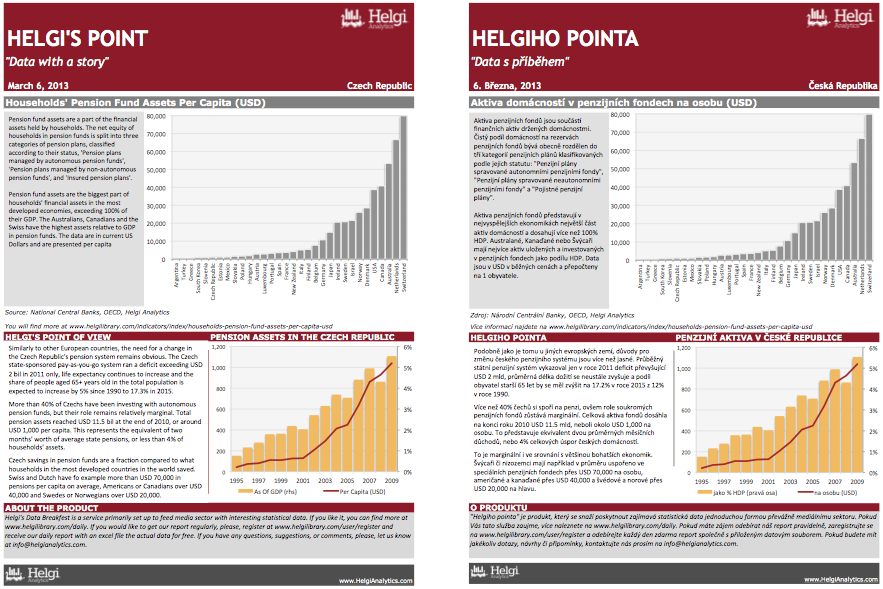 Language: Czech / English
Provider: 2013
Pages: 1
Similarly to other European countries, the need for a change in the Czech Republic's pension system remains obvious. The Czech state-sponsored pay-as-you-go system ran a deficit exceeding USD 2 bil in 2011 only, life expectancy continues to increase and the share of people aged 65+ years old in the total population is expected to increase by 5% since 1990 to 17.3% in 2015. More than 40% of Czechs have been investing with autonomous pension funds, but their role remains relatively marginal. Total pension assets reached USD 11.5 bil at the end of 2010, or around USD 1,000 per capita. This represents the equivalent of two months' worth of average state pensions, or less than 4% of households' assets. Czech savings in pension funds are a fraction compared to what households in the most developed countries in the world saved. Swiss and Dutch have fo example more than USD 70,000 in pensions per capita on average, Americans or Canadians over USD 40,000 and Swedes or Norwegians over USD 20,000.
Economy | Czech Republic | March 05, 2013
Download
Excel Sheet, 1 pages