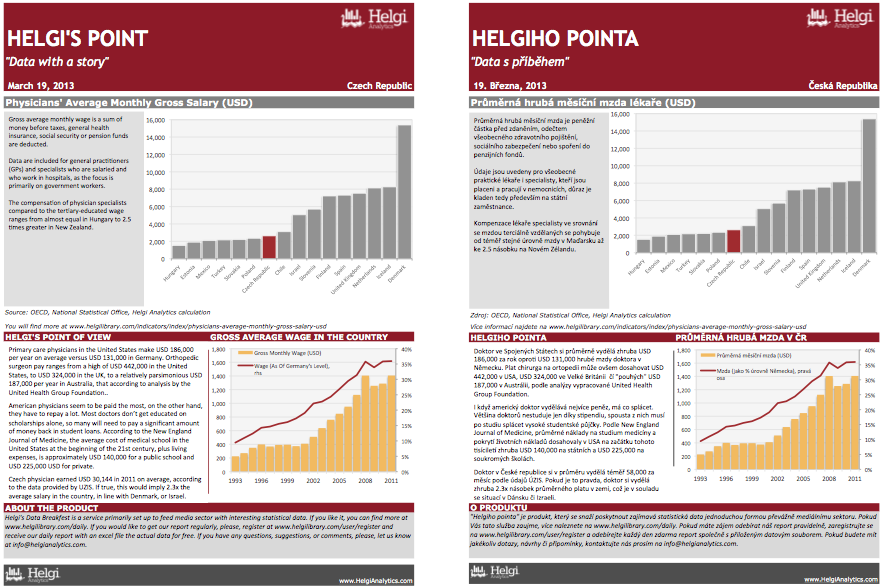 Language: Czech / English
Provider: 2013
Pages: 1
Primary care physicians in the United States make USD 186,000 per year on average versus USD 131,000 in Germany. Orthopedic surgeon pay ranges from a high of USD 442,000 in the United States, to USD 324,000 in the UK, to a relatively parsimonious USD 187,000 per year in Australia, that according to analysis by the United Health Group Foundation.. American physicians seem to be paid the most, on the other hand, they have to repay a lot. Most doctors don’t get educated on scholarships alone, so many will need to pay a significant amount of money back in student loans. According to the New England Journal of Medicine, the average cost of medical school in the United States at the beginning of the 21st century, plus living expenses, is approximately USD 140,000 for a public school and USD 225,000 USD for private. Czech physician earned USD 30,144 in 2011 on average, according to the data provided by UZIS. If true, this would imply 2.3x the average salary in the country, in line with Denmark, or Israel.
Health Care | Czech Republic | March 18, 2013
Download
Excel Sheet, 1 pages