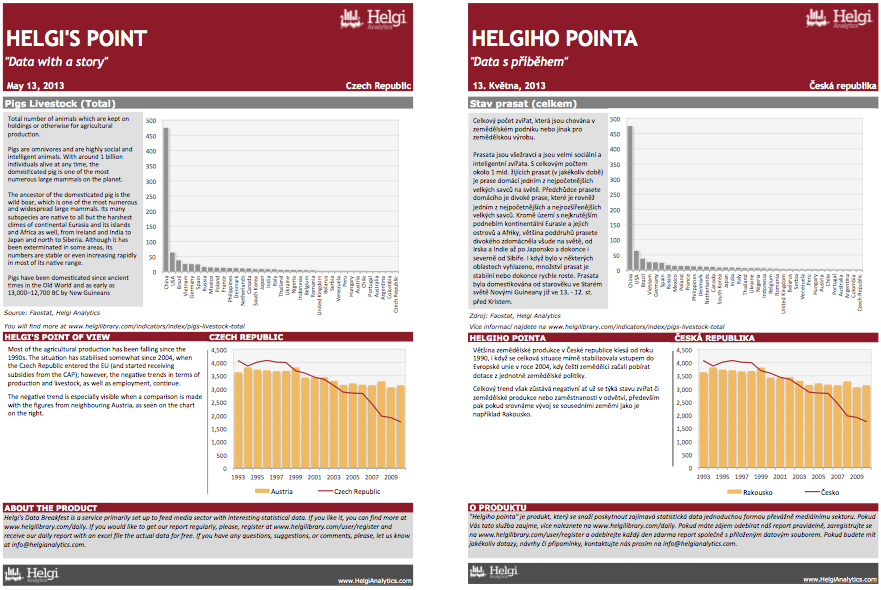 Total number of animals which are kept on holdings or otherwise for agricultural production.

Pigs are omnivores and are highly social and intelligent animals. With around 1 billion individuals alive at any time, the domesticated pig is one of the most numerous large mammals on the planet.

The ancestor of the domesticated pig is the wild boar, which is one of the most numerous and widespread large mammals. Its many subspecies are native to all but the harshest climes of continental Eurasia and its islands and Africa as well, from Ireland and India to Japan and north to Siberia. Although it has been exterminated in some areas, its numbers are stable or even increasing rapidly in most of its native range.

Pigs have been domesticated since ancient times in the Old World and as early as 13,000–12,700 BC by New Guineans.

In the Czech Republic, most of the agricultural production has been falling since the 1990s. The situation has stabilised somewhat since 2004, when the country entered the EU (and started receiving subsidies from the CAP); however, the negative trends in terms of production and livestock, as well as employment, continue.

The negative trend is especially visible when a comparison is made with the figures from neighbouring Austria, as seen in the report.