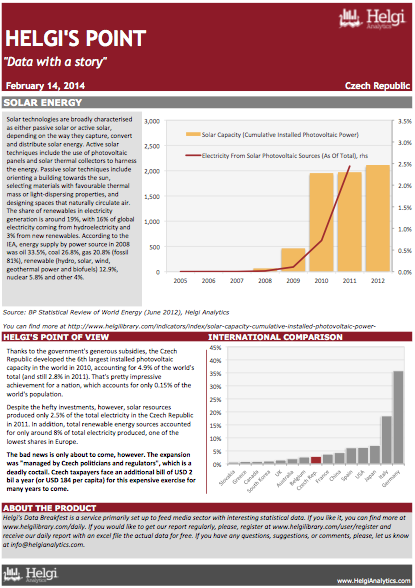 Language: Czech / English
Provider: 2013
Pages: 1
Thanks to the government's generous subsidies, the Czech Republic developed the 6th largest installed photovoltaic capacity in the world in 2010, accounting for 4.9% of the world's total (and still 2.8% in 2011). That's pretty impressive achievement for a nation, which accounts for only 0.15% of the world's population. Despite the hefty investments, however, solar resources produced only 2.5% of the total electricity in the Czech Republic in 2011. In addition, total renewable energy sources accounted for only around 8% of total electricity produced, one of the lowest shares in Europe. The bad news is only about to come, however. The expansion was "managed by Czech politicians and regulators", which is a deadly coctail. Czech taxpayers face an additional bill of USD 2 bil a year (or USD 184 per capita) for this expensive exercise for many years to come.
Energy & Utility | Czech Republic | February 13, 2013
Download
Excel Sheet, 1 pages