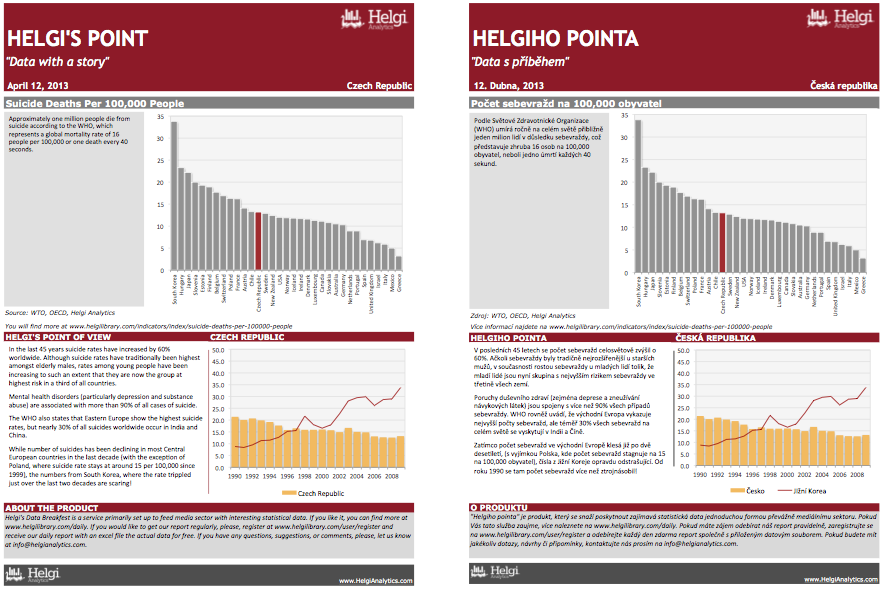 Approximately one million people die from suicide according to the WHO, which represents a global mortality rate of 16 people per 100,000 or one death every 40 seconds. In the last 45 years suicide rates have increased by 60% worldwide. Although suicide rates have traditionally been highest amongst elderly males, rates among young people have been increasing to such an extent that they are now the group at highest risk in a third of all countries.

Mental health disorders (particularly depression and substance abuse) are associated with more than 90% of all cases of suicide.

The WHO also states that Eastern Europe show the highest suicide rates, but nearly 30% of all suicides worldwide occur in India and China.

While number of suicides has been declining in most Central European countries in the last decade (with the exception of Poland, where suicide rate stays at around 15 per 100,000 since 1999), the numbers from South Korea, where the rate trippled just over the last two decades are scaring!

Download
Helgi's Point - The Largest Armies in The World

Download
How Are School Systems Adapting to Increasing Numbers of Immigrant Students?