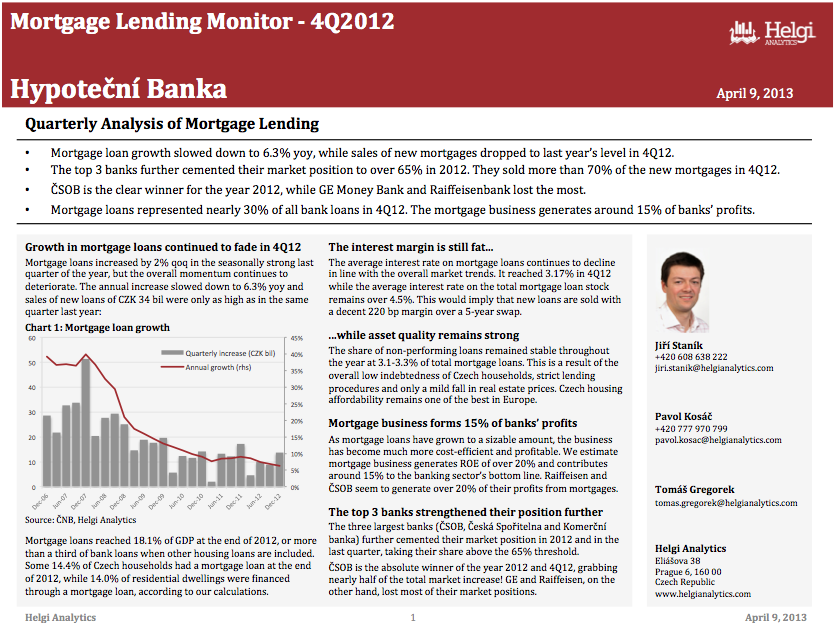 Hypoteční Banka is the largest player on the Czech mortgage lending market, with a share of over 25%. Luckily, it is a pure mortgage player, which gives us plenty of useful information about the mortgage business. We therefore use Hypoteční Banka’s financials to analyse the whole mortgage market in the Czech Republic. Here are the main conclusions from the exercise:

Hypoteční Banka has been showing a fairly lousy ROE of less than 10% since 2005. This is highly misleading, as the bank’s capital adequacy ratio (CAR) has been kept at 40-50% since 2008, when a hefty share capital increase was made. When the CAR is “adjusted” to 15% (in line with the banking sector), Hypoteční’s ROE jumps to a more realistic 20-30%.

The asset quality of mortgages is very good. At the end of 2012, non-performing  loans accounted for only 3.2% of total mortgage loans. Hypoteční Banka has been gaining market share over the last 18 months, so its asset quality has deteriorated more than that of the market. Still, the bank’s cost of risk has stayed below 50 bp of average loans, a clear sign of the bank is not having a problem with asset quality.

Mortgage lending could be extremely cost-efficient once it crosses a certain volume of loans. Although Czech banks already belong among the most efficient in the CEE region (with costs to income at below 50%), Hypoteční Banka is a different species.

From costs representing over 80% of income when the business started in 2000, the bank’s ratio has dropped below 20% now. Although one might argue about efficiency gains from being in the ČSOB family, the numbers speak for themselves.

Mortgage loans have grown by an impressive 27% a year in the last decade, being the single biggest driver of asset growth. Despite the weakening momentum, mortgages are still the main engine of the sector’s growth.