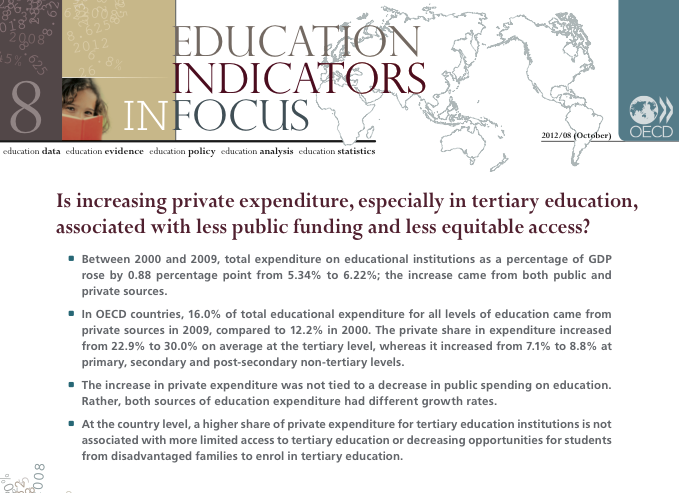 Language: English
Provider: OECD
Pages: 4
Between 2000 and 2009, total expenditure on educational institutions as a percentage of GDP rose by 0.88 percentage point from 5.34% to 6.22%; the increase came from both public and private sources. In OECD countries, 16.0% of total educational expenditure for all levels of education came from private sources in 2009, compared to 12.2% in 2000. The private share in expenditure increased from 22.9% to 30.0% on average at the tertiary level, whereas it increased from 7.1% to 8.8% at primary, secondary and post-secondary non-tertiary levels. The increase in private expenditure was not tied to a decrease in public spending on education. Rather, both sources of education expenditure had different growth rates. At the country level, a higher share of private expenditure for tertiary education institutions is not associated with more limited access to tertiary education or decreasing opportunities for students from disadvantaged families to enrol in tertiary education.
Education | Australia | October 04, 2012
Download
Excel Sheet, 4 pages