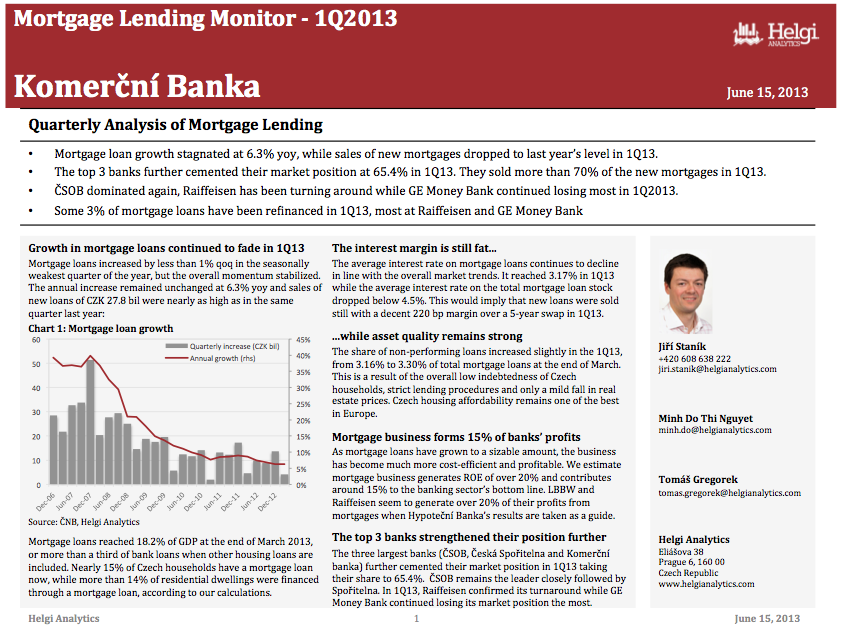 This report focuses specifically on development in Komercni Banka in the 1Q2013. The key highlights are:

Komerční Banka’s mortgage loans increased 0.8% qoq and 7.3% yoy in 1Q13, slightly more than the overall market. On the other hand, the loans provided by Modrá Pyramida (Komerční’s building society) dropped a further 2.1% qoq or 6.3% yoy in 1Q13.

Komerční banka has been growing faster than the market throughout the years 2011 and 2012. In 1Q13, the bank took a breather losing 3 bp, so was holding 19.0% of all Czech mortgage loans at the end of March, according to our calculations (see chart 62 on page 18).

The bank clearly benefits from its superior funding and capital positions when compared to the smaller players.

Having said that, the bank has not been as aggressive as its peers ČSOB and Česká Spořitelna in the most recent quarters. This is in particularly visible when we look at quarterly sales of new mortgage loans, where Komerční’s market share is some 5-10% lower than that of its peers.

In addition, 1Q13 was another quarter, when the bank sold fewer mortgages than a year ago. The gap to its two main rivals Česká Spořitelna and ČSOB seems rising again:

Mortgage loans represented 29.8% of Komerční’s total loans at the end of March 2013. That is up from the figure of 15% seen a decade ago, implying an impressive annual growth of 22%.

The massive growth in volumes made a difference to the bottom line of the bank. When Hypoteční banka’s financials are taken as a benchmark (for more details see page 9), we believe mortgage lending business generates around 14% of Komerční Banka’s overall profitability now.