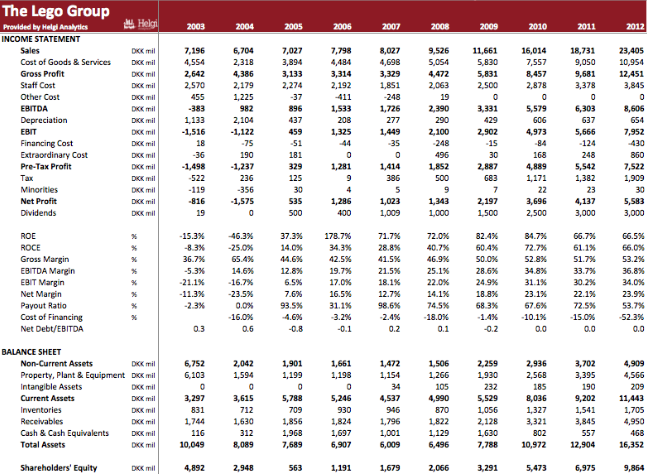 The Lego Group is a privately held manufacturer of toys based in Billund, Denmark. The company's flagship product, Lego, consists of colourful interlocking plastic bricks and an accompanying array of gears, minifigures and various other parts. Lego bricks can be assembled and connected in many ways, to construct such objects as vehicles, buildings, and even working robots. Anything constructed can then be taken apart again, and the pieces used to make other objects. Lego began manufacturing interlocking toy bricks in 1949. Since then a global Lego subculture has developed, supporting movies, games, competitions, and six themed amusement parks. As of 2013, around 560 billion Lego parts had been produced. The name Lego comes from the Danish phrase "leg godt", which means "play well"

This excel file offers a summary of the company's performance in between 2003-2012 on the annual basis. You will find here all the key numbers from the company's balance sheet, income statement and cash flow and the main ratios related to the company's business