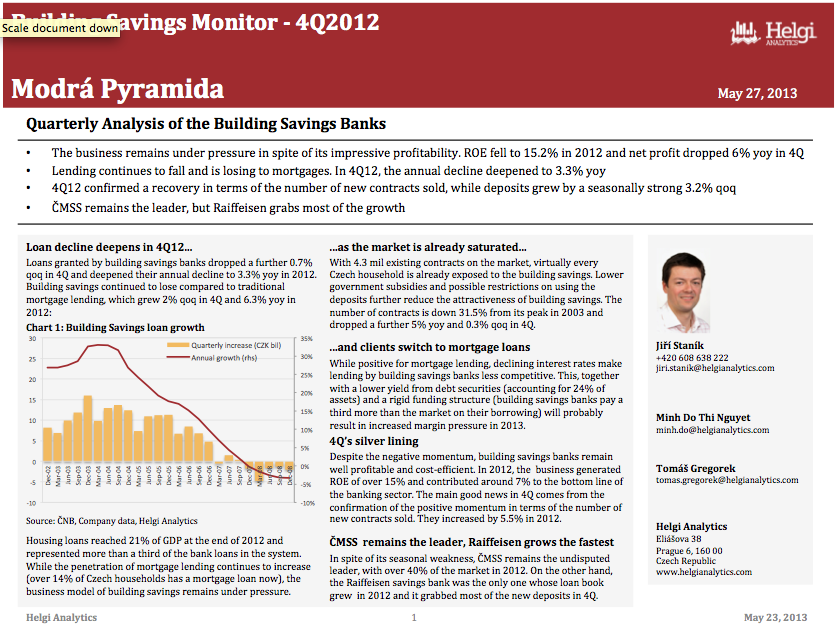 This report focuses specifically on development in Modra Pyramida in 4Q2012, the building savings bank of Komercni Banka. The main conclusions are:

The bank gained a market share of approximately 20 bp in loans in 4Q12, twice as much as for the full year 2012, but on the other hand, it lost the most out of all five building savings banks on the deposit side – 55 bp in 4Q12, by our calculation (but gained 5 bp in the full year 2012).

Despite gaining market share over the last two years, the bank’s overall balance sheet momentum remains negative. Loans declined by a further 1.2% qoq in the last quarter and the full-year decline reached 4.3% yoy, while overall deposits dropped 1.7% in 4Q and were flat in 2012.

Modrá Pyramida remains impressively profitable in spite of the market slowdown. In 2012, the bank achieved ROE of 14.2%, which is a remarkable achievement given the fact that the bank’s capital adequacy has been exceeding 20%, the highest figure on the market.

Part of Modrá Pyramida’s superior profitability, however, is helped by a low tax burden. Thanks to its structure of debt securities, the bank’s effective tax rate is 8.5% over the last three years, half of the sector average.

Being the two strongest lenders on the market (alongside ČMSS), it suggests that lending activity is relatively cost-demanding, but rewarded on the revenue side and in the bank’s bottom line.

Closer cooperation with Komerční Banka following the takeover in 2006 seems to be bearing fruit, so a further tie-up of Pyramida’s sales network with Komerční’s products (and the fees generated from that) will be interesting to watch for in the coming quarters.