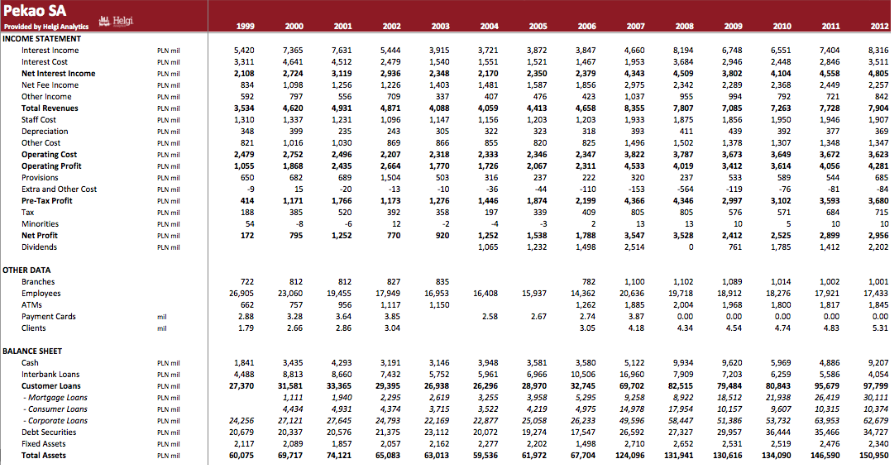 Bank Polska Kasa Opieki Spółka Akcyjna, commonly using the shorter name Bank Pekao S.A., is the second largest bank in Poland and one of the largest financial institutions in Central and Eastern Europe. Italian bank UniCredit owns 59% of the company. The bank was founded in 1929 by the Ministry of Treasury as a national bank, mainly to provide financial services to Poles living abroad. In 1939 the bank had branches in virtually every capital city of countries where Poles lived. Bank Pekao operates through the second largest network of branches in Poland (over 1,000 branches), employs 17,400 people and in 2012 reached a net profit of USD 908 million. Group of Bank Pekao consists of: the biggest investment fund in Poland, pension fund, two brokerage houses, as well as leasing and factoring subsidiaries, all of them leading in their respective market fields.

This excel file offers a summary of the company's performance on the annual basis in between 1999-2012. You will find here all the key numbers from the bank's balance sheet, income statement and main ratios related to the bank's business.

In addition, the file provides a detailed overview of the bank's market position in the comparison with the overall banking sector