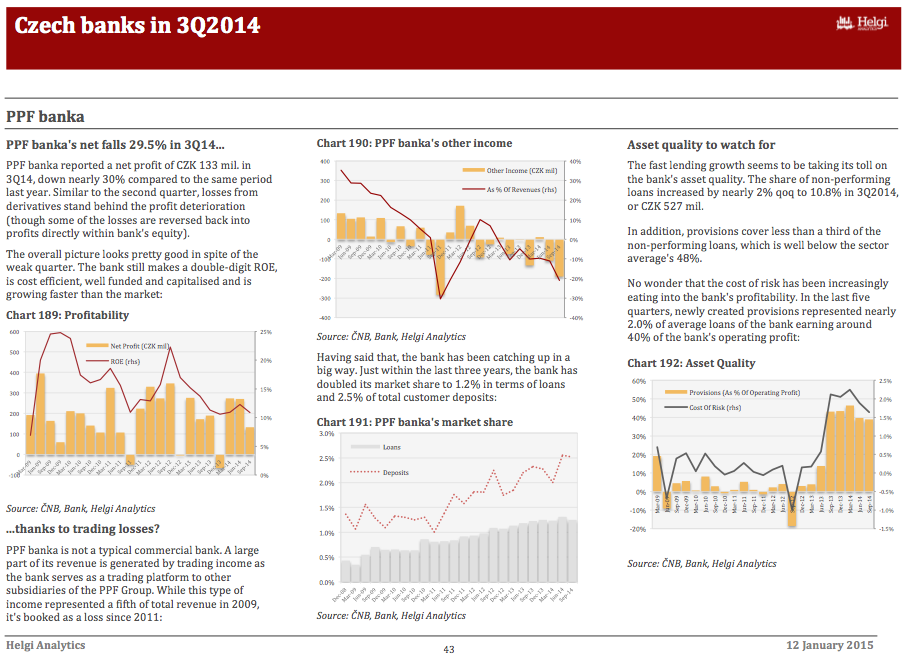 PPF banka reported a net profit of CZK 133 mil. in 3Q14, down nearly 30% compared to the same period last year. Similar to the second quarter, losses from derivatives stand behind the profit deterioration (though some of the losses are reversed back into profits directly within bank's equity).

The overall picture looks pretty good in spite of the weak quarter. The bank still makes a double-digit ROE, is cost efficient, well funded and capitalised and is growing faster than the market:

...thanks to trading losses?

PPF banka is not a typical commercial bank. A large part of its revenue is generated by trading income as the bank serves as a trading platform to other subsidiaries of the PPF Group. While this type of income represented a fifth of total revenue in 2009, it's booked as a loss since 2011.

Having said that, the bank has been catching up in a big way. Just within the last three years, the bank has doubled its market share to 1.2% in terms of loans and 2.5% of total customer deposits.

Asset quality to watch for

The fast lending growth seems to be taking its toll on the bank's asset quality. The share of non-performing loans increased by nearly 2% qoq to 10.8% in 3Q2014, or CZK 527 mil.

In addition, provisions cover less than a third of the non-performing loans, which is well below the sector average's 48%.

No wonder that the cost of risk has been increasingly eating into the bank's profitability. In the last five quarters, newly created provisions represented nearly 2.0% of average loans of the bank earning around 40% of the bank's operating profit.