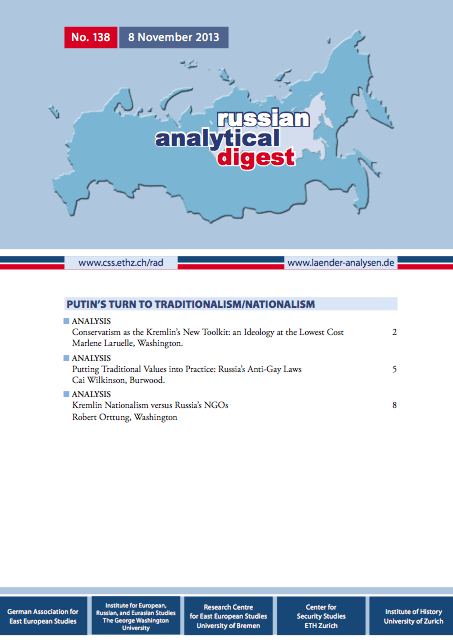 This edition examines the turn to traditionalism and nationalism within public discourse in Russia. In the first article, Marlene Laruelle argues that the conservative turn within the regime’s focus on values and identity is not an attempt to reshape Russian society, but an ideology of the lowest cost that targets the conservative majority with the aim of creating a new depoliticized consensus, as well as a new dimension in its international branding of Russia. Secondly, Cai Wilkinson considers the so-called anti-gay laws in Russia. It is highlighted that the impact has been to implicitly legitimize homophobic violence and discrimination, and that the logic of moral sovereignty invoked around these laws has set a dangerous precedent of using claims about defending traditional values as a way to justify violations of human rights norms. Thirdly, Robert Orttung assesses how Putin has sought to discredit independent Russian NGOs by branding them as servants of foreign sponsors. It is argued that these efforts serve the primary goal of blocking the rise of an alternative to the incumbent authorities, but have had the effect of stunting the development of Russian civil society and damaging Russia’s international image