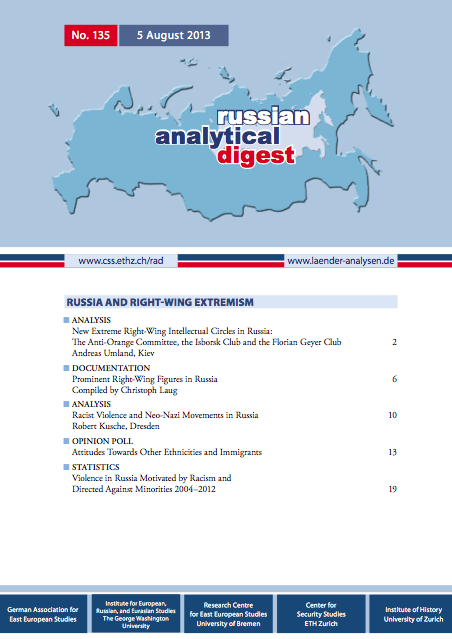 This edition considers the role of right-wing extremism in both politics and society in Russia. In the first article, Andreas Umland details how an increasing number of high-profile ultra-nationalist figures and groups are being incorporated into the mainstream political discourse. He highlights the emergence of three new extreme right-wing intellectual discussion clubs made up of a broad spectrum of publicists, journalists, politicians, and academics. To accompany this article, Christoph Laug outlines the biographies for several prominent ultra-nationalist figures in Russia. In the second article, Robert Kusche examines incidents of racist violence and the role of neo-Nazi movements in Russia. He suggests that these groups are winning popular support for their racist slogans and thus claim to act as the voice of “the people’s will”, using this as a justification for vigilante actions. The edition also contains a series of opinion polls about Russian attitudes towards other ethnicities and immigrants, and statistics about racially-motivated violence in Russia