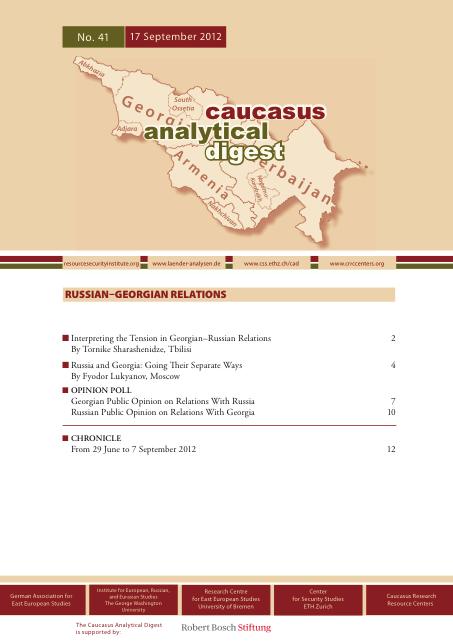 Language: English
Provider: Caucasus Analytical Digest
Pages: 14
This issue of the CAD examines the state of Russian-Georgian relations four years after the August 2008 war. Fyodor Lukyanov argues that for Russia, the August war was about NATO expansion and restoring Russia's status as a great power. Four years after the war, Russia is now concerned with building a new identity oriented towards the future rather than rooted in its past and is even looking for inspiration from Georgia's reform program, which has helped to build an effective, though still authoritarian, state. Tornike Sharashenidze argues that Russia is not only concerned with the threat of NATO enlargement, but also with the fact that Georgia serves as an alternative model of development in the post-Soviet space. The Georgian authorities, for their part, even if they use Russia's enemy image to gain domestic and external support, believe that the country benefits from a rupture with Russia and its Soviet past that allows it to pursue its Western orientation though, ultimately, Georgia would like to see a modernizing and democratizing Russia as a neighbor.
Society | Georgia | August 31, 2012
Download
Excel Sheet, 14 pages