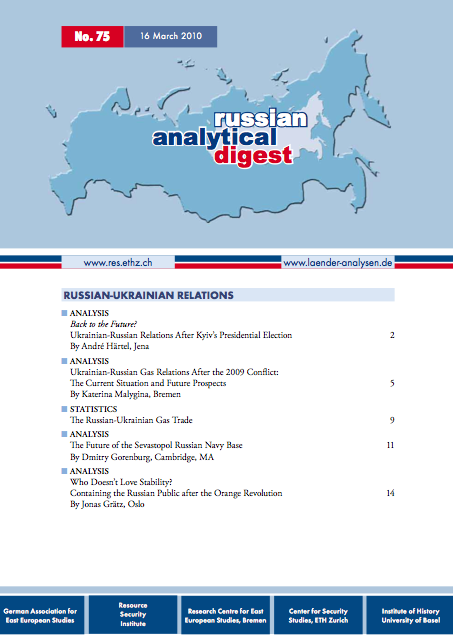 Language: English
Provider: Russian Analytical Digest
Pages: 17
This issue of the Russian Analytical Digest examines Russian-Ukrainian relations. First, André Härtel analyzes the significance of the election of Viktor Yanukovych as the new president of the Ukraine for the country's relations with Russia. Second, Katerina Malygina examines the changes in the energy dialogue between the two countries. Third, Dmitry Gorenburg argues that the future status of Russia's naval base in Sevastopol is likely to be brought back to the forefront of Russian-Ukrainian bilateral relations. Finally, Jonas Grätz examines the impact of the Orange Revolution on Russian elite strategies and the framing of the public discourse.
Society | Russia | March 09, 2010
Download
Excel Sheet, 17 pages