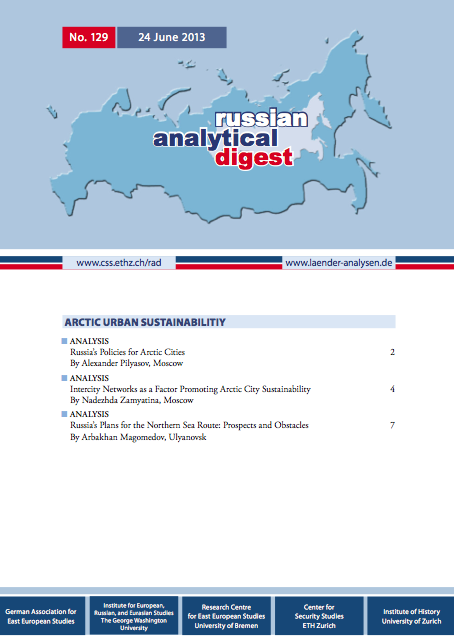 This edition focuses on the issue of urban sustainability in the Russian Arctic. In the first article, Alexander Pilyasov categorizes Russia’s northern urban centers as large administrative centers, single-industry cities or port cities. He suggests that policy-makers need to adopt informed approaches recognising the specifics of these typologies to ensure sustainable, economically self-sufficient and socially resilient urban centers. Nadezhda Zamyatina critically assesses the view that migration flows are the source of the problems associated with urban Arctic centers. Drawing on an analysis of the social-networking site Vkontakte, she argues that rather than being purely economic, migration flows appear to be strongly influenced by social networks, which help furnish northern cit¬ies with a number of return migrants. In the third article, Arbakhan Magomedov examines the benefits and obstacles in the development of the Northern Sea Route. He posits that some of these obstacles have nothing to do with Russia, while others derive from the weakness of Russia’s system of management in achieving its declared goals.