Tatra Trucks at a Glance 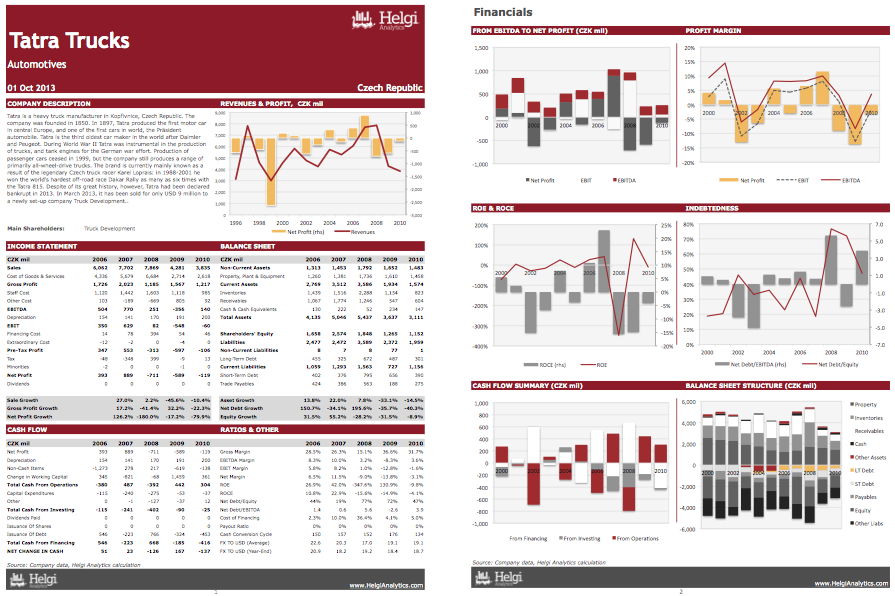 Tatra is a heavy truck manufacturer in Kopřivnice, Czech Republic. The company was founded in 1850. In 1897, Tatra produced the first motor car in central Europe, and one of the first cars in world, the Präsident automobile. Tatra is the third oldest car maker in the world after Daimler and Peugeot. During World War II Tatra was instrumental in the production of trucks, and tank engines for the German war effort. Production of passenger cars ceased in 1999, but the company still produces a range of primarily all-wheel-drive trucks. The brand is currently mainly known as a result of the legendary Czech truck racer Karel Loprais: in 1988-2001 he won the world's hardest off-road race Dakar Rally as many as six times with the Tatra 815. Despite of its great history, however, Tatra had been declared bankrupt in 2013. In March 2013, it has been sold for only USD 9 million to a newly set-up company Truck Development.

This report offers a summary of the company's performance in 1996-2010. You will find here all the key numbers from the company's balance sheet, income statement and cash flow on the annual basis.