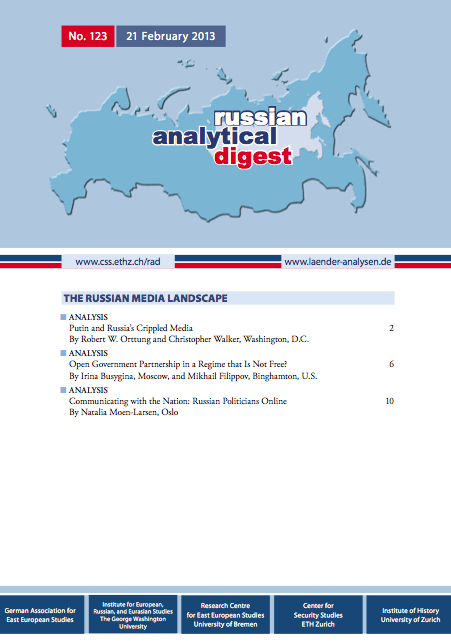 Language: English
Provider: Russian Analytical Digest
Pages: 13
This issue of the RAD analyzes the state of the Russian media and information sphere today. The first article by Robert Orttung and Christopher Walker focuses on television, which is the main source of information for most Russians. The state strictly controls the content of this medium, though the rise of the internet and active protest movements is forcing the government to change its policies regarding broadcast content. Irina Busygina and Mikhail Fillipov examine how an authoritarian government can use channels designed for the free flow of information to pursue its own purposes. The article by Natalia Moen-Larsen focuses on the way former President Dmitry Medvedev used his web blog as a way of engaging the increasing number of Russian citizens who participate in on-line social media.
Economy | Russia | February 11, 2013
Download
Excel Sheet, 13 pages