Home » Reports » The South Caucasus After the Global Economic Crisis

The South Caucasus After the Global Economic Crisis 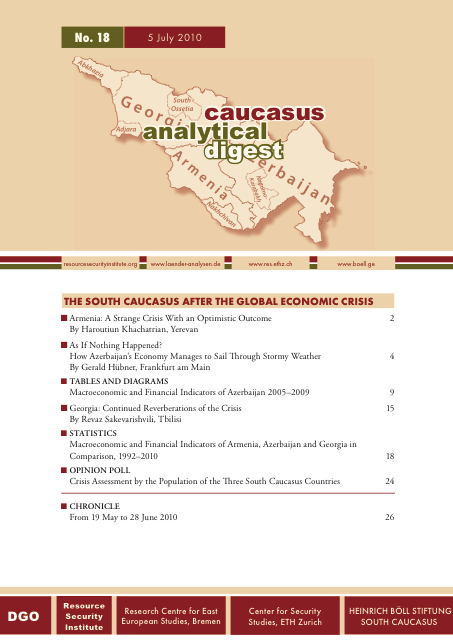 Language: English
Provider: CAD
Pages: 27
This issue of the Caucasus Analytical Digest assesses the state of the economy in the countries of the South Caucasus following the global economic crisis. First, Haroutiun Khachatrian argues that the consequences for the Armenian economy have not been as dramatic as initially expected. Second, Gerald Hübner argues that a similar story is true for Azerbaijan, where the financial sector had only limited exposure to international markets. Nevertheless, due to the country's heavy dependence on oil exports, the economy suffered from the high volatility of world oil prices. Finally, Revaz Sakevarishvili argues that the economic situation in Georgia is continuing to deteriorate, demonstrated in particular by a heavy drop in foreign investment.
Economy | Armenia | July 01, 2010
Download
Excel Sheet, 27 pages