Home » Reports » Turkey and Iran in the South Caucasus

Turkey and Iran in the South Caucasus 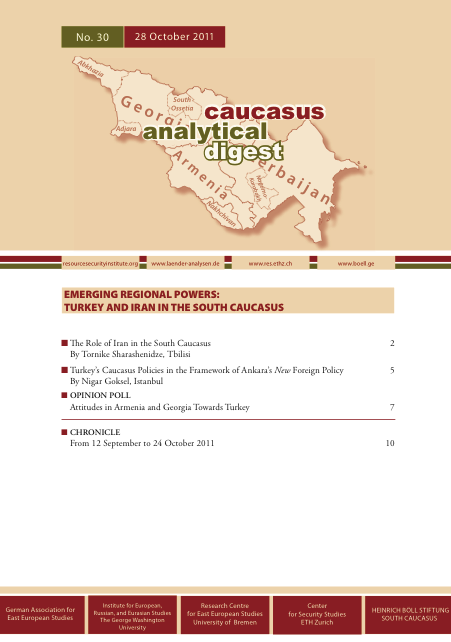 Language: English
Provider: Caucasus Analytical Digest
Pages: 11
This issue focuses on emerging regional powers in the South Caucasus. The first article posits that Iran's policy in the South Caucasus is shaped by its desire to counter threats from regional and outside powers, while expanding its influence in the region; in this context, Iran backs Armenia in the Nagorno-Karabagh conflict in order to balance against Turkey and Azeri irredentist claims in Iran itself; Azerbaijan is the key concern in the region for Iran. The second article places Turkey's Caucasus policies within the overall framework of Turkish foreign policy, pointing out that Ankara's foreign policy is focusing more on neighboring regions than on the west in order to pursue the goal of becoming a regional economic power; the article comes to the conclusion that Turkey should pursue more consistent policies regarding the countries of the South Caucasus in order to achieve its goals.
Economy | Armenia | October 01, 2011
Download
Excel Sheet, 11 pages

Download
The South Caucasus After the Global Economic Crisis