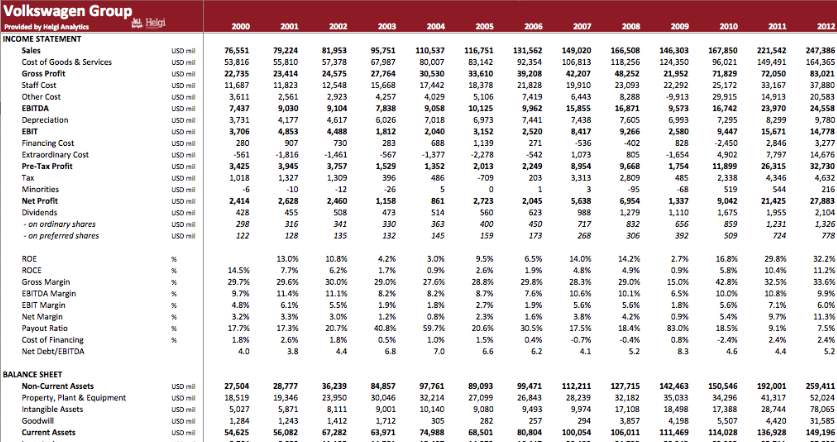 Volkswagen is a German automobile manufacturer and the original and biggest-selling marque of the Volkswagen Group, which now also owns the Audi, Bentley, Bugatti, Ducati, Lamborghini, SEAT, Porsche, Giugiaro and Škoda marques and the truck manufacturer Scania. Volkswagen means "people's car" in German. VW was originally founded in 1937 by the Nazi trade union. After WWII, the Volkswagen factory at Wolfsburg came under British control and the factory survived by producing cars for the British Army instead, thanks chiefly to the protection of British Army Major Ivan Hirst. VW's turnaround was cemented with the introduction of key models in the 1970s, such as the Passat, Golf and Polo, which shared many characteristic defining features, as well as parts and engines. Following the acquisitions of Audi, Seat, and Škoda, VW moved upwards in the late 1990s as it acquired three luxury brands, Lamborghini, Bentley, and Bugatti.

In addition, the excel file provides a summary concerning Volkswagen Group's production and sales on its key markets and a brief valuation of company's shares.