Wüstenrot Stavebni Sporitelna at a Glance 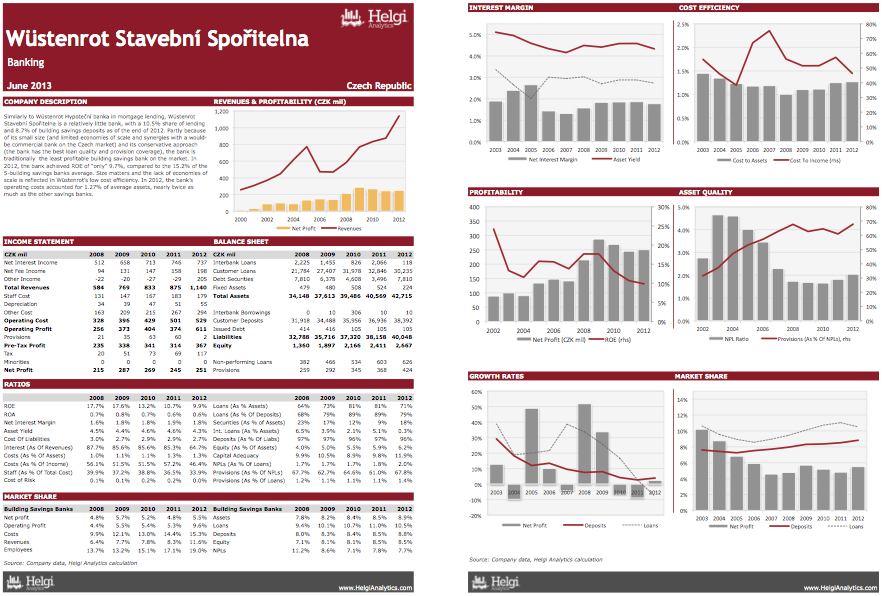 Similarly to Wüstenrot Hypoteční banka in mortgage lending, Wüstenrot Stavební Spořitelna is a relatively little bank, with a 10.5% share of lending and 8.7% of building savings deposits as of the end of 2012.

Partly because of its small size (and limited economies of scale and synergies with a would-be commercial bank on the Czech market) and its conservative approach (the bank has the best loan quality and provision coverage), the bank is traditionally  the least profitable building savings bank on the market. In 2012, the bank achieved ROE of “only” 9.7%, compared to the 15.2% of the 5-building savings banks average. Size matters and the lack of economies of scale is reflected in Wüstenrot’s low cost efficiency. In 2012, the bank’s operating costs accounted for 1.27% of average assets, nearly twice as much as the other savings banks.

This report offers a summary of the company's performance in 2008-2012. You will find here all the key numbers from the bank's balance sheet, income statement and main ratios related to the bank's business. In addition, the report provides a detailed overview of the bank's market position in the comparison wi the overall banking sector as well as with other building savings banks